The civil war in Syria is at a stalemate, while some in the U.S. have called for limited military intervention. Senior Fellow Ken Pollack opens his new Middle East Memo by noting that “There is a growing recognition that the Syrian civil war is now dominated by its military dimension, and until there is a breakthrough on the battlefield, there will be no breakthroughs at the negotiating table.” 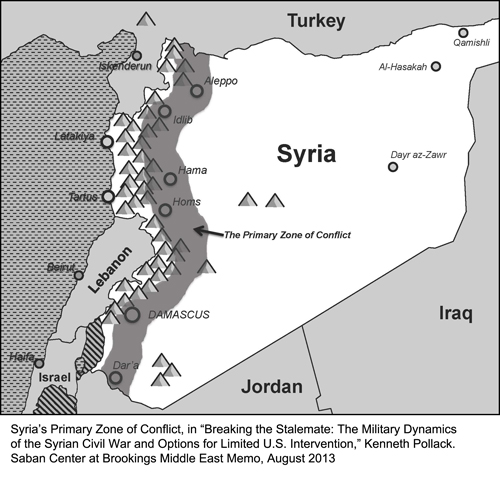 In “Breaking the Stalemate: The Military Dynamics of the Syrian Civil War and Options for Limited U.S. Intervention,” Pollack details the strengths and weaknesses of the opposition and the regime, plus options for U.S. interventions. His map, reprinted above, shows clearly how the lines of conflict have been compressed into a narrow belt running through the country. As Pollack explains:

Because the advantages of the two sides are now more or less balanced, the fighting has bogged down into a predictable (and predicted) stalemate. The opposition controls 60-70 percent of Syrian territory, but the regime controls 60-70 of the population—which is concentrated in the west of the country. Indeed, the countervailing advantages of the two sides have resulted in a rough deadlock along a line running north-south from Aleppo, through Idlib, Hama, Homs, Damascus and down to Dara’a. Virtually all of the major combat has occurred in a belt roughly 50 kilometers wide centered on this chain of cities—Syria’s primary zone of conflict.

The map indicates where, according to Pollack, the fighting will drag on, causing thousands more to die. Read the memo and also more research, commentary and activities on Syria.