Longer-term interest rates are quite low around the world. Figure 1 below shows ten-year government bond yields since 1990 for the United States, Canada, Germany, the United Kingdom, and Japan. The downward trend is clear. Moreover, further sharp declines in longer-tem yields have occurred over the past year or so. For example, in the US, ten-year Treasury yields have fallen from around 3 percent at the end of 2013, to about 2.5 percent during the summer of 2014, to around 1.9 percent today. The recent renewed decline was unexpected by most observers, including me. Why are longer-term interest rates so low? And why have they fallen even further recently, despite signs of strength in the US economy? 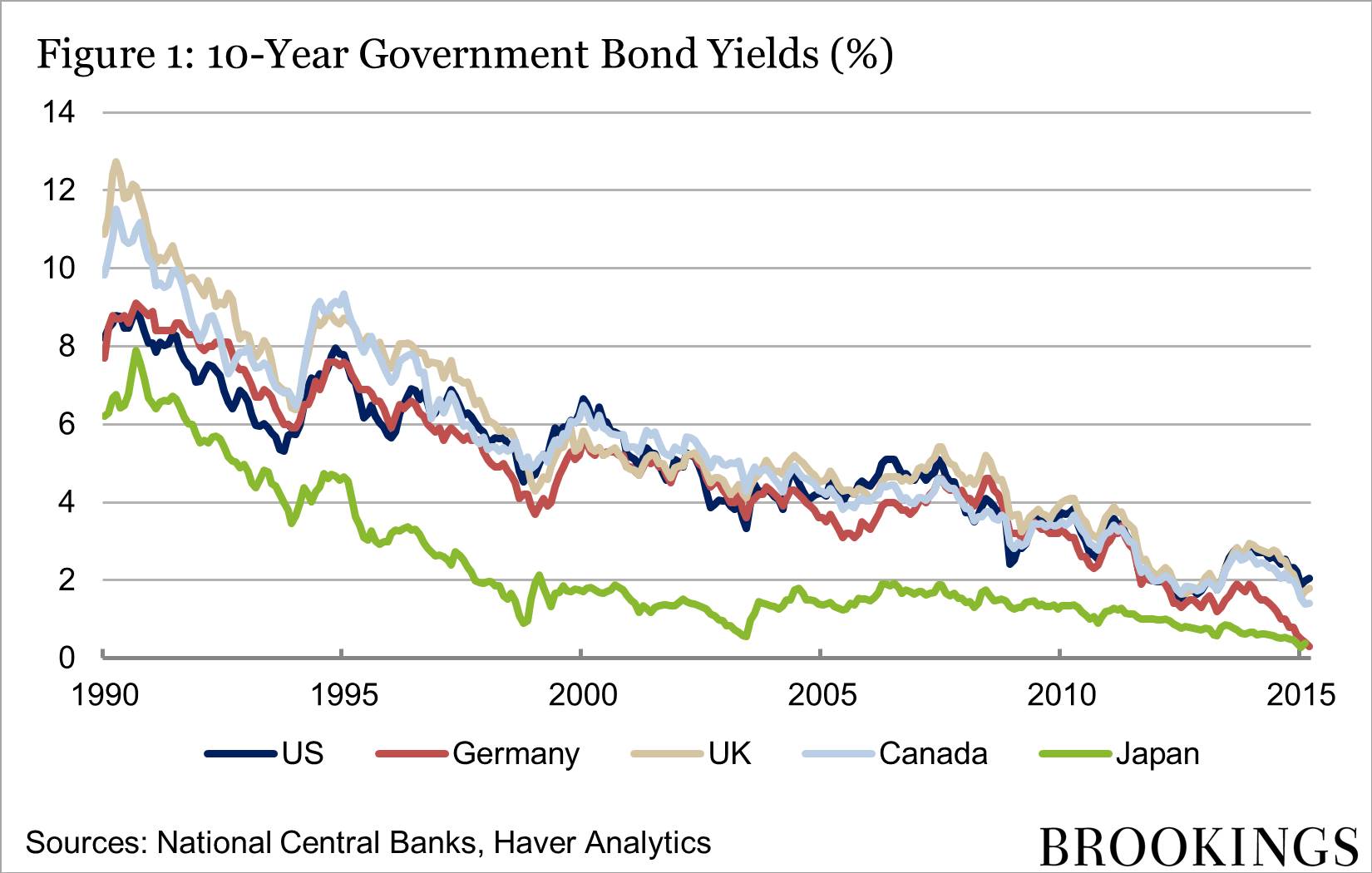 The focus of this post, though, is on the behavior of term premiums—the third component of bond yields. Briefly, a term premium is the extra return that lenders demand to hold a longer-term bond instead of investing in a series of short-term securities (a new one-year security each year, for example). Typically, long-term yields are higher than short-term yields, implying that term premiums are usually positive (investors require extra compensation to hold longer-term bonds instead of short-term securities).

Term premiums cannot be directly observed but must be estimated from data on short-term and longer-term interest rates. Figure 2 below shows the ten-year yield on US government bonds and the associated term premium since 1961, as estimated in recent work by Tobias Adrian, Richard K. Crump, and Emanuel Moench at the Federal Reserve Bank of New York. For example, on January 2 of last year, an investor holding a ten-year Treasury bond earned a 3.2 percent yield, of which 1.6 percentage points (the estimated term premium) was the investor’s compensation for holding a longer-term security. As the figure shows, like overall yields, term premiums have generally trended down since the early 1980s. The figure also shows the sharp decline in both longer-term yields and term premiums over the past year or so. 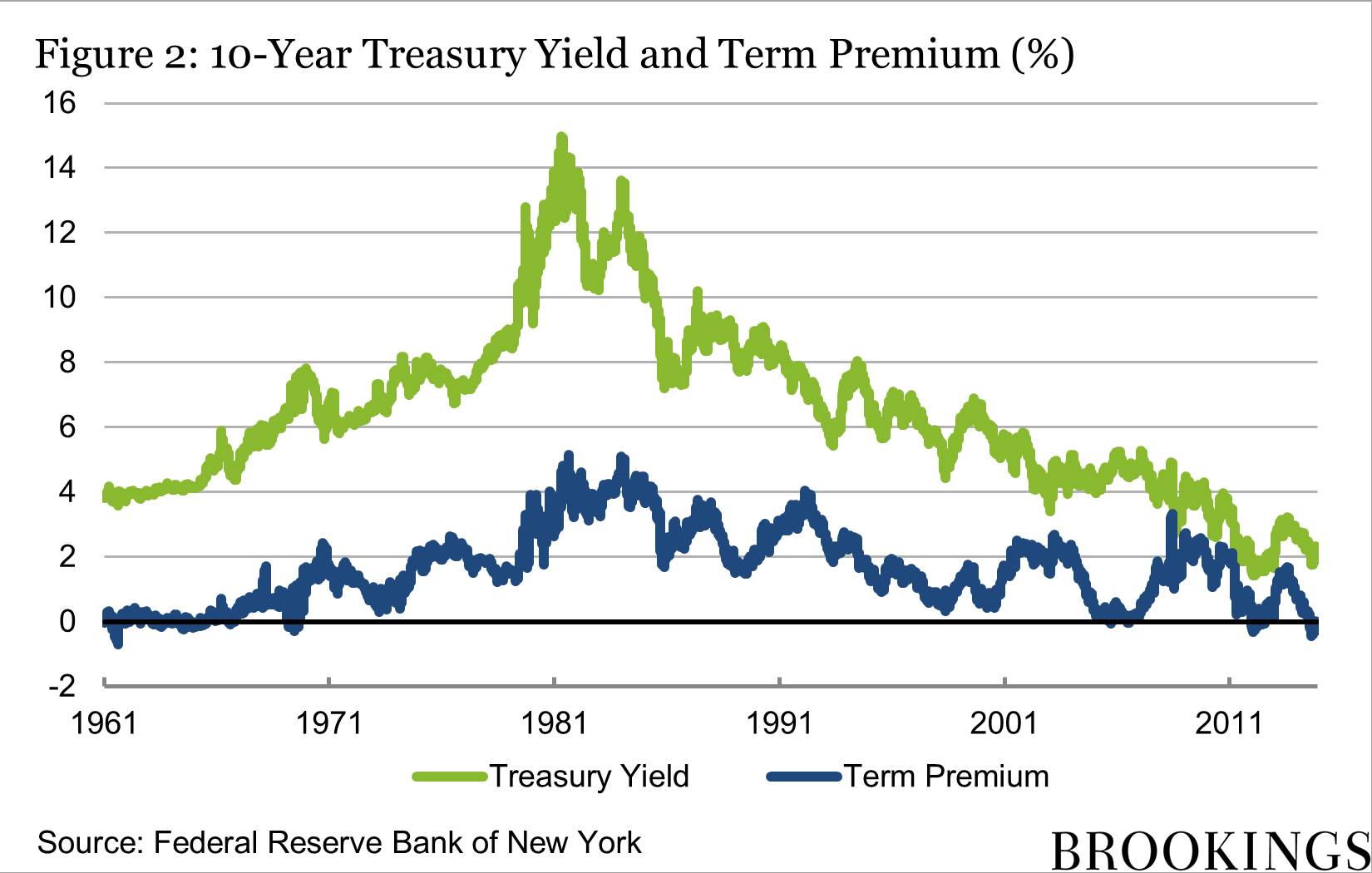 Risk. All else equal, term premiums on longer-term securities will be higher when investors are more risk-averse and/or the perceived risk of holding those securities is high. Historically, the most important risk for long-term bondholders has been the risk of unexpected inflation. Figure 2 shows term premiums rising from very low levels in the 1960s, peaking in the late 1970s and early 1980s, and generally on a downward trend since then. Bondholders were unconcerned about inflation in the 1960s, but the high inflation of the 1970s and early 1980s increased the risk of holding longer-term bonds. Since the 1980s, inflation and inflation fears have receded steadily, and bondholders have accordingly been willing to accept less compensation for bearing inflation risk.

Uncertainty about the near-term outlook for the economy or monetary policy also raises the riskiness of bonds. Researchers have found that term premiums tend to rise in recessions; they also rise in periods in which there is greater disagreement among economic forecasters. Merrill Lynch has devised a useful, market-based measure of uncertainty about the future course of interest rates, called the MOVE index (for Merrill Lynch Option Volatility Estimate). Higher values of MOVE indicate times when traders are willing to pay more for protection against unexpected movements in interest rates. Figure 3 below, based on a second paper by Adrian, Crump, and Moench, along with Michael Abrahams, shows that the estimated term premium and the MOVE index move together, consistent with the idea that more uncertainty and risk raise term premiums. For example, MOVE increased during the “taper tantrum” episode of the summer of 2013, a period when markets became especially uncertain about prospects for monetary policy. 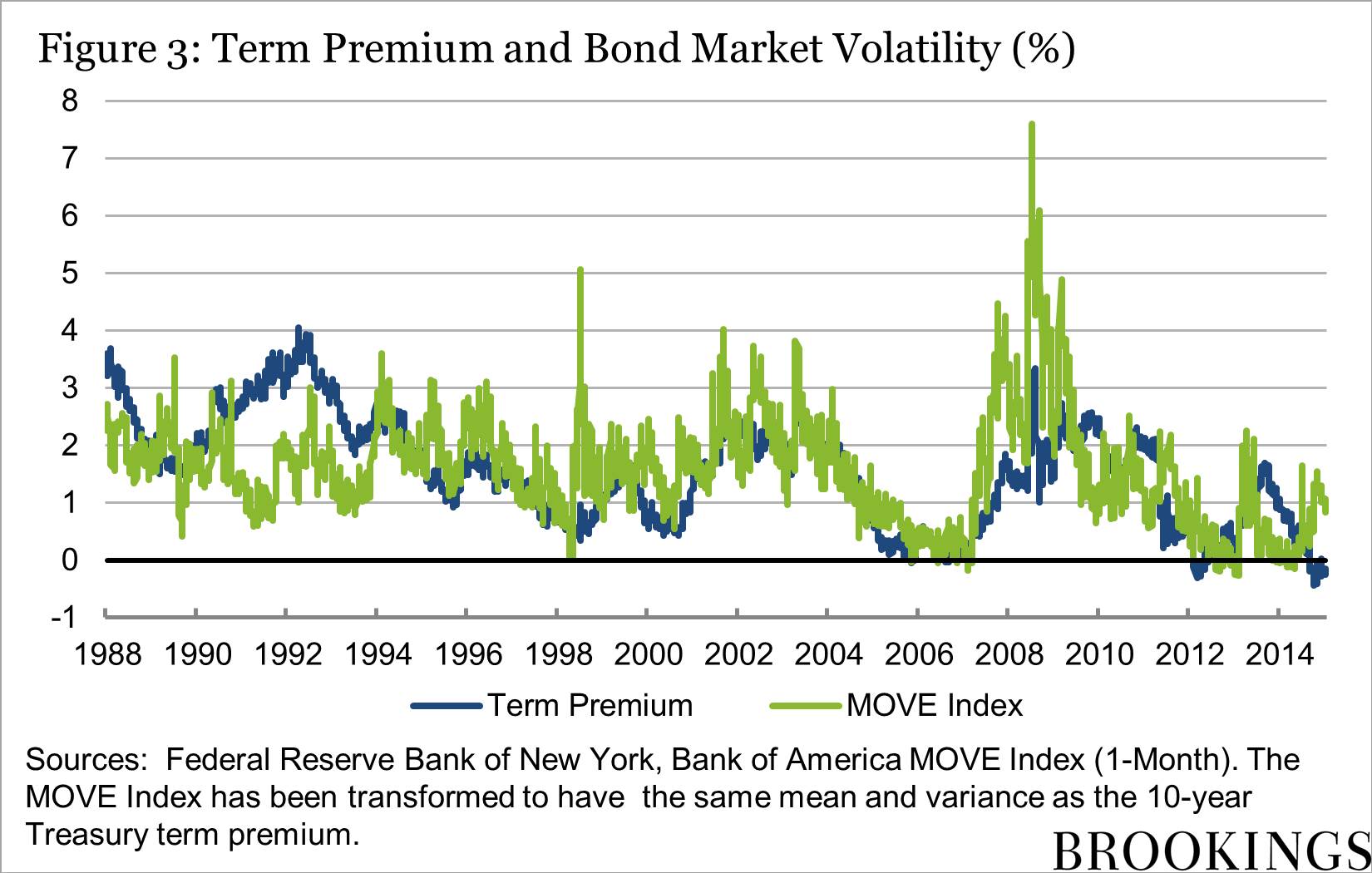 As Figure 3 shows, term premiums have recently been zero or even slightly negative. That’s consistent with the fact that, in a world of low inflation and accommodative monetary policy, as we have today, holding longer-term bonds may actually reduce the overall risk of investors’ portfolios. For example, bad news about the economic outlook hurts stocks, but tends to be good for bond prices (which are inversely related to yields), as a weaker outlook implies that central banks will have to hold rates lower for longer. Bonds can also provide a hedge against the risk of deflation, since falling consumer prices increase the real value of the fixed dollar payments that bondholders receive. If longer-term bonds are a hedge against risk, then investors should be willing to accept low or even negative compensation for holding bonds rather than short-term securities.

Supply and demand for specific types of securities. In textbooks, the demand for securities depends only on their riskiness and expected return. In reality, securities may have other appealing features, such as liquidity (easy salability) or the ability to satisfy regulatory requirements. Therefore, changes in the demand for or supply of specific bonds can affect their term premiums. Treasury bonds, because of their unrivaled liquidity and safety, often attract extra investor demand in times of global economic or political upheaval. Treasuries are also often the asset of choice for foreign governments that want to hold large quantities of foreign exchange reserves.

Alan Greenspan’s “conundrum”
of 2006, when the Fed raised short-term rates but long-term rates didn’t follow, appears to have been the result of an unusually low term premium, as can be seen in Figure 3. The “global saving glut” and the associated demand for Treasuries by foreign central banks and sovereign wealth funds may account for the low value of the term premium around 2006. Reduced uncertainty about the course of interest rates, as indicated by the low value of the MOVE index in 2006 (Figure 3), was likely also a factor.

What’s the bottom line? Overall, the behavior of term premiums helps explain the generally low level of longer-term interest rates in recent years (together, of course, with subdued inflation expectations and the market’s expectation that short-term rates will also remain low). The low level of term premiums in turn reflects a number of factors, including: minimal investor concern about inflation; relatively low uncertainty about the likely future course of interest rates (as shown by the MOVE index in Figure 3); a strong global demand for safe, liquid assets (for use as international reserves, for example, and to satisfy regulatory requirements); and quantitative easing programs by central banks.

What about the decline in longer-term yields since early 2014? In the US at least, that decline is somewhat surprising, as economic fundamentals have recently seemed more consistent with rising, not falling, longer-term yields. The year 2014 was a good one on the whole for the U.S. economy, with three million jobs created, and longer-term inflation expectations appeared to remain stable. By the process of elimination, with fundamentals stable or improving, much of the decline in yields over the past year must reflect a sharp drop in term premiums. That’s in fact what Figure 3 shows. 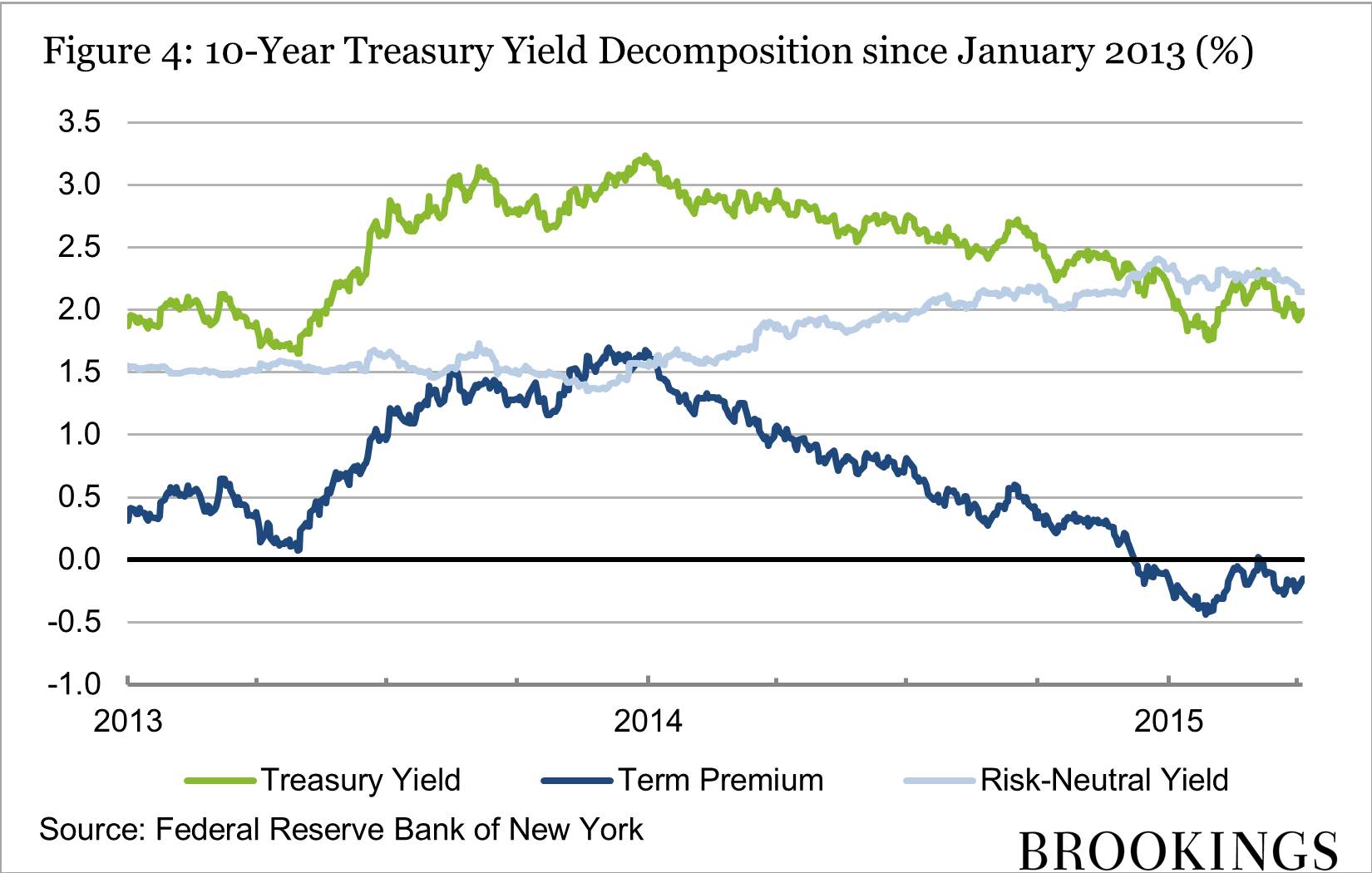 Figure 4, provided by Tobias Adrian, takes a closer look at some components of Treasury yields since the beginning of 2013. The 10-year yield, in green, rose sharply during the taper tantrum of 2013, then fell through 2014. The dark blue line shows the estimated term premium. The difference between the yield and the term premium is the risk-neutral yield, plotted in light blue in Figure 4. The risk-neutral yield, an estimate of what the 10-year Treasury yield would be if investors were indifferent to risk, actually rose through 2014, implying that the recent decline in yields is entirely due to a falling term premium.

That naturally raises the question of why the term premium has recently fallen by so much. The answer is not obvious. Fed policy doesn’t seem to explain the decline, as purchases of Treasuries under the quantitative easing program wound down last year. The MOVE index suggests that uncertainty about bond yields has not declined appreciably over the past year (see Figure 3). Regulatory changes have increased the demand for Treasuries, but those rules are being phased in over a long period and are thus not good explanations of the sharp recent swing in term premiums.

Two possible explanations for the recent moves come to mind. First, during 2014, economic weakness outside the US, especially in Europe, increased the expectation of additional quantitative easing abroad. In January 2015 the European Central Bank did indeed announce a substantial program of securities purchases. The anticipation of these purchases, together with the ongoing central bank purchases in Japan and elsewhere, may be “spilling over” into the demand for US Treasuries, pushing down their term premium. Second, the surprising decline in the price of oil occurred at about the same time as the decline in longer-term yields. Falling oil prices may have reduced investors’ perception of longer-term inflation risk while also signaling weakness in the global economy. Neither of these explanations is completely satisfying. Thus, the recent decline in longer-term yields and term premiums in the US remains something of a puzzle.