Investing in female entrepreneurs has a multiplier effect. Women often invest a higher proportion of their income back into their families and communities than men. Indeed, it is well-documented that when women control a greater proportion of household resources, the family allocates more money toward food and children’s education, and children that are healthier and more educated are better-prepared to contribute to a developing economy. However, many African women face cultural and social barriers to becoming entrepreneurs—creating the need for promoters of the gender empowerment agenda to acknowledge the entangled relationship between women and their social environment.

Michelle Obama echoed this point during the United States of Women Summit in June, saying, “We’ve seen time and again that when educated girls grow into successful women, they don’t just pat themselves on the back and enjoy the fruits of their successes—no, as they should, they reach back and they help other women and girls along after them.” She singled out Kenyan entrepreneur Ciiru Waithaka, the founder of FunKidz, a successful children’s furniture company that designs products inspired by African stories. Waithaka garnered the First Lady’s praise for founding a program that has taught 350 disadvantaged youth about technology and innovation to date.

Prior to her success, however, Waithaka struggled with a common problem for female entrepreneurs in Africa: limited access to capital. She eventually received a loan from Goldman Sachs’ 10,000 Women Initiative, which provides capital to female entrepreneurs in developing countries—but many other potential business owners are not so lucky. According to the International Finance Corporation, nearly 70 percent of female-owned small and medium enterprises in the developing world are reported to be unserved or underserved by financial institutions. In sub-Saharan Africa, formal borrowing rates lag behind those in other developing regions for both men and women (Figure 1). 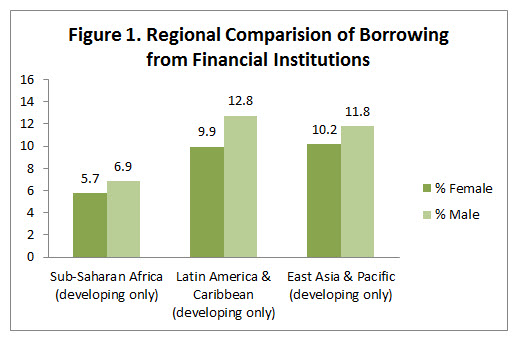 Still, women are excluded from basic financial access to a greater extent than men. Only a quarter of women (compared to nearly one-third of men) have an account at a financial institution (Figure 2). Notably, only 5.7 percent of women—and 6.9 percent of men—actually borrowed from financial institutions, demonstrating that having a bank account does not necessarily increase access to capital. 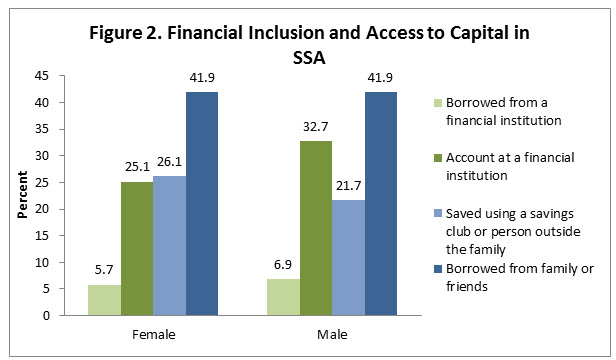 However, women achieve parity to men in their ability to borrow from family or friends. In fact, they outpace men in their utilization of savings clubs, demonstrating a creative solution to limited access to formal finance. Since savings clubs are more popular among women, this trend might signify that women are more dependent on each other for capital than men. Thus, increasing access to capital for one female entrepreneur could have a snowball effect for other female entrepreneurs in her community.

And yet access to capital is not the only or necessarily the greatest constraint facing women entrepreneurs. One study shows that in sub-Saharan Africa, the gap in access to credit between men and women disappears when controlling for other factors such as the applicant’s level of education and income. Another study observes that the average small business in a developing country lacks basic business practices—such as formal record keeping, marketing, setting financial targets, and efficient inventory management—that are standard for small businesses in developed countries. To remedy this, many governments and nonprofits have attempted to develop business skills and encourage human capital transfer through business training programs. A meta-review of studies about the effectiveness of these training programs finds that business training has no effect or a marginally negative effect on the survival rate of female-owned businesses—while there is some evidence for a small positive effect on male-owned businesses. So, how is it that even with training, women still struggle to succeed relative to their male peers?

One possibility is that women face societal constraints that inhibit their business potential, even after receiving training. In Ethiopia, one study finds that small and micro enterprises located near the homes of the owners fare worse than those located near customers and/or raw materials suppliers. This situation creates a serious conflict for women, who cannot travel far from their homes as they are disproportionately responsible for domestic work like housekeeping and childrearing. Competing household needs also make women more likely to mix home and business funds, which is an unfortunately common practice among male- and female-owned small businesses in the developing world.

A pilot program in Uganda attempted to overcome social obstacles that impede female entrepreneurs by combining the hard skills of vocational training with education on marriage, sex, and reproductive health. The study shows that after two years, program participants were 72 percent more likely to engage in income-generating activities—including self-employment—while rates of marriage and childbearing at a young age fell considerably. The study provides evidence for multi-faceted intervention when it comes to female entrepreneurs, as both social and economic constraints play a pivotal role in determining the success of a female business owner.

However, another study from Uganda examines the effects of female empowerment on the competitiveness of women and their siblings in Ugandan communities. Though empowerment had no effect on female competitiveness, the study finds that brothers of newly empowered sisters were significantly more competitive than brothers of women who did not receive the female empowerment training. While competitiveness benefits society in some ways by creating more driven and productive members, this result could have been caused by a perceived threat to male identity in a traditionally male-dominated society. This finding suggests that men should take part in conversations surrounding gender roles, so as to not feel threatened by shifts in gender dynamics.

The benefits of male inclusion are uncharted but potentially great. For example, teaching men to support their wives’ economic pursuits would have generational benefits, as their children are more likely to implement better business practices if they have a father or a mother who owned a business.

All of the evidence from these studies suggests the need to address societal factors when attempting to enable female entrepreneurs. Addressing the hard skill deficit can only go so far without combatting the typical domestic and societal pressures that continue to plague women in the developing world. Accomplished female entrepreneurs, in turn, can potentially generate a greater impact on their environment by channeling their success into helping their children and communities.