On Monday, July 18, 2016, the world celebrated Nelson Mandela International Day, a day recognizing the former president of South Africa’s commitment to fostering peace and freedom. Every year the Nelson Mandela Foundation hosts a lecture, inviting prominent individuals to discuss significant social issues affecting the African continent. For this year’s lecture, Bill Gates was selected to speak on the theme of “Living Together” in front of a packed stadium in Pretoria. Gates focused on a topic Mandela returned to repeatedly throughout his life—the power of the youth. In the words of Gates, “…young people are better than old at driving innovation because they are not locked in by the limits of the past… we must clear away the obstacles standing in young people’s way so that they can seize all of their potential.”

Although youth unemployment in Africa is often seen as a growing challenge, a number of experts interpret the large youth population as an opportunity, as long as the youth have access to the economic opportunities through which they can channel their energy into progress. As Africa’s youth is predicted to grow exponentially, achieving broad-based economic growth and development will rely on breaking down the barriers to economic opportunity, by investing in human capital (through education) and in improving business environments.

Figure 2.3. Youth unemployment will continue to be a growing challenge in 2016 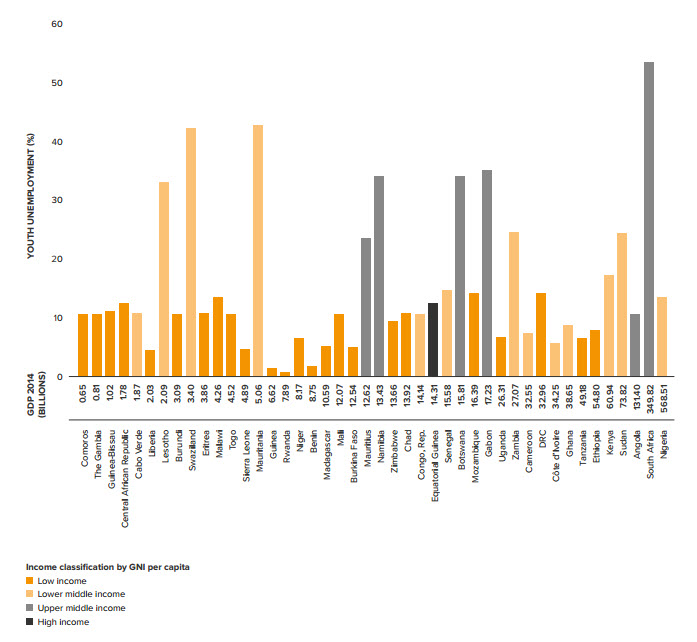 See the Brookings Africa Growth Initiative’s Foresight Africa 2016 report, from which the figure below comes, for more highlights on the growing challenge of youth unemployment in Africa. In addition, earlier this month the Brookings Institution hosted an Africa Policy Dialogue on the Hill on jobs in Africa, alluding to the shortcomings of the educational systems and the importance of infrastructure and electricity to support business and attract investment. For a summary of the conversation, see here.