From 2000-2014, like many other sub-Saharan African countries, Kenya experienced high growth, at an average of 4.37 percent. Unfortunately, the 2007-2008 election-related violence as well as the global financial crisis halted much of Kenya’s economic progress, meaning it has lagged slightly behind the region, whose average growth rate was 4.88 percent over that same period.

Indeed, in a recent paper, The African Lions: Kenya country case study,  Mwangi S. Kimenyi, Francis M. Mwega, and Njuguna S. Ndung’u agree that Kenya’s economic gains have been noteworthy, but not transformative. Employment is still concentrated in agriculture. Most of the population is poor and lives in rural areas. Labor productivity is rising, but is still low. The country also falls behind in macroeconomic stability, health outcomes, governance, enrollment rate in higher education, and other important indicators of middle-income countries.

To the authors, it seems, Kenya is not yet meeting its potential, and so in their paper they explore Kenya’s growth trends, demographic shifts, and employment landscape to forecast and recommend policies to help Kenya take ahold of its comparative advantages, exploit its so-far-missed opportunities, and reduce poverty. For more on these and related topics, you can read the full paper here.

Despite these challenges and largely thanks to its skyrocketing financial and information and communication technology advancements, Kenya is sub-Saharan Africa’s fourth-largest economy (after Nigeria, South Africa, and Angola)—certainly an “African Lion,” they say. However, many obstacles to growth are standing in its way, and, left unaddressed, will certainly prevent this lion from roaring any louder.

The shifting population of Kenya provides many opportunities for growth

The youth bulge and the potential for a demographic dividend

The age makeup of Kenya is changing, note Kimenyi et al., creating the potential for a demographic dividend—creating a larger working-age population compared to a dependent (young or retired) population and leading to growth in the supply of productive workforce—if policymakers can successfully prepare for and take advantage of its youth bulge.

Indeed, the youth bulge (and thus opportunity that comes with it) is there: Kenya’s birth rates have rapidly declined while mortality rates have dropped significantly too. In 2014, the dependent population was 44.75 percent (20.4 million) of the total population, while the working-age population was larger, at 55.25 percent (25.2 million). The cohort of the population aged 0-14 is the largest now, and as its members move into the “youth” age group—and become working age—they will greatly increase the gap between the working-age and dependent populations (see Figure 1). This phenomenon provides a great opportunity as the number of working-age people will vastly surpass that of the dependents, allowing working-age people to “accumulate savings and increase investment in the economy,” say the authors. 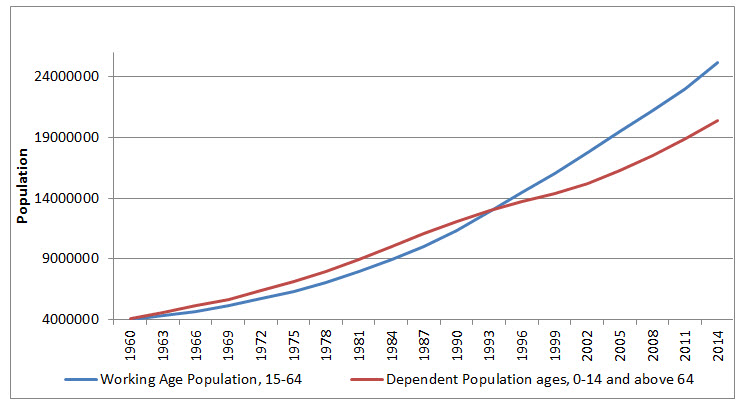 This potential boom to the economy carries along two caveats: First, the advantages cannot be utilized if there are not policies in place to create jobs for this massive influx of potential employees into the job market and educational systems to provide them with the skills to be hired. In addition, the authors warn, there must be a “quality institutional environment,” that promotes the rule of law, bureaucratic efficiency, low corruption, freedom of speech, and good infrastructure, among many others. They also argue that the devolution in Kenya’s 2010 Constitution and recent reforms in public service, the judiciary, and the electoral system are strengthening its institutions and are putting the country well on its way. Second, the population will not be able to achieve its full potential without government investments in education and training, which the authors discuss more fully in the paper.

Emergence of the middle class

Kenya has a particular advantage when it comes to its middle class—(defined by the African Development Bank as those who spend between $2 and $20 a day or earn an annual income exceeding $3,900)—which is 44.9 percent of its population, proportionally the largest in the East African region. The region itself averages only 22.6 percent and the second-largest is Uganda, at 18.7 percent. According to the authors, this middle class emergence “presents an opportunity for social and economic growth in Kenya since the middle class has been argued to play a key role as a conduit for advancing social progress, an agent of change for institutional reforms, and a catalyst for the realization of inclusive growth, innovation, and entrepreneurial drive.” In particular, say the authors, through its large purchasing power, the rise of the middle class contributes to the retail sector, raises demand for housing, increases consumption overall, drives entrepreneurship and innovation, and draws in investors (both foreign and domestic).

Since, as the authors say, “Increased urbanization and expanding cities have been shown to increase economic growth. Kenya, which is quickly urbanizing, is presented with another opportunity to spur economic growth. Kenya’s urban population is projected to reach 32.83 percent of its population by 2030—up from 25.5 percent in 2014. Nairobi is already one of the biggest cities on the continent, set to meet the 10 million person “mega-city” definition in a few decades. While the majority of people still live in rural areas, the city population growth will create demands for urban infrastructure, putting pressure on already over-utilized systems.” They emphasize that expected economic growth will happen only if urbanization is “accompanied with enhanced infrastructural development and decongestion of the urban areas.”

Is Kenya creating enough jobs and in the right places?

Increased urbanization comes hand in hand with a large labor supply. Without the creation of formal jobs, residents instead turn to informal ones—a trend already occurring in Kenya. Notably, the number of informally employed persons has soared over the last few decades, overtaking formal employment in 1994 (Table 1). The authors attribute this growth trend to the government’s market and trade liberalization policies, and the failure of the formal sector to create jobs. While the increase in the informal sector does signify that Kenyans are finding opportunities for income, the trend raises questions about its sustainability and benefits for the country. In particular, informal businesses struggle to expand and absorb more labor, are less productive, pay lower wages on average, and workers are not usually entitled to benefits, such as medical, leave, or pensions. As the authors state, “The informal sector is a reservoir of self-employed, unemployed, and underemployed and so may have a weak relationship to economic growth.” The authors suggest, then, that the focus should be on how to make the informal sector more dynamic while at the same time seeking to make it easier to do business in the formal sector—largely through capital accumulation. 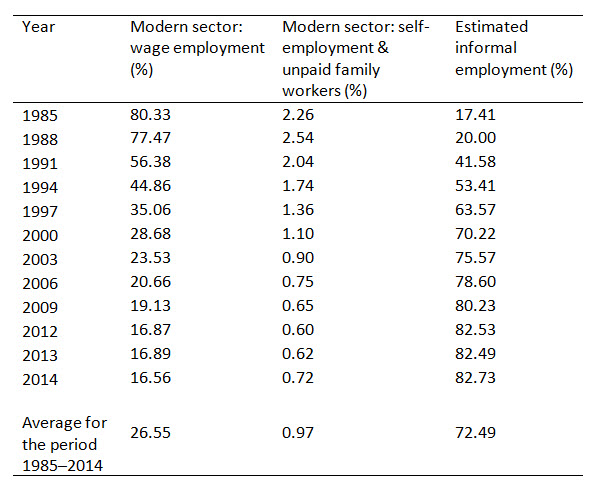 Thus, without consistent job creation—especially in the formal sector—Kenya will struggle to create demographic dividend and further drive growth. In creating jobs, though, the authors note that, so far, Kenya’s policies “have consistently promoted economic growth as the panacea to employment creation.” It seems that more targeted interventions are needed to encourage the private sector to create formal jobs. As discussed above, employment in Kenya is headed toward the informal sector—indicating that Kenya’s employment responsiveness to growth in GDP is low. In fact, in 2014, every 1 percentage point increase in GDP would create only a 0.56 percentage point increase in employment. For a country with a youth bulge on the way, this is simply not enough. 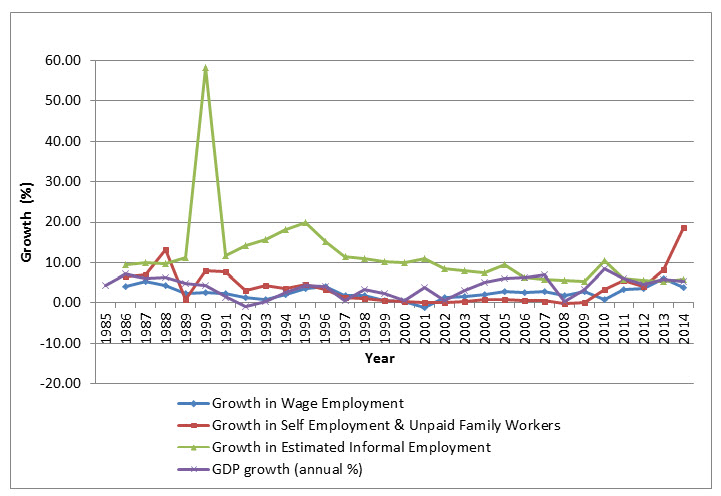 As with unemployment, it seems that Kenya’s growth has not been pro-poor. Though Kenya doubled its GDP between 2005/06 and 2013, its poverty rate increased at the same time (Table 2). According to the authors, “For employment-intensive growth to translate into poverty reduction it must occur in a ‘more productive’ sector, while ‘less productive’ sectors may require productivity-intensive growth to ensure a decline in head count poverty (Hull 2009).” In addition, the agriculture and construction sectors play a big part in reducing poverty as the poor most often are in rural or urban informal sectors.

In their paper Kimenyi et al. review a number of trends in Kenya’s demographics, growth, and employment, finding that Kenya’s growth, while robust, has still been harnessed with lower economic outcomes and a failure to reach economic transformation so far. However, the authors argue that many of the opportunities have not yet passed by and new ones—especially the demographic dividend—will soon be here. Thus, the authors recommend the following.

1. To reach the demographic dividend:

a. Increase the “healthy, educated, and productive” working-age population,

b. Support the building of quality institutions,

d. Provide for the formal labor market with unions and laws protecting both employees and employers.

2. To move labor from the informal sector to the formal one:

c. Identify obstacles to and create policies for enhancing labor mobility between the two sectors.

In their paper, the authors also survey the history of Kenya’s economic and social policies that have both spurred and slowed growth in the country, examine the impact of the transforming information and communication technology and financial sectors on Kenyan growth, discuss labor productivity and human capital more closely, and review threats to the country’s current and future economic progress. For more detailed analysis on the issues discussed above or on these additional topics, you can read the full paper here.

Note: The African Lions project is a collaboration among United Nations University-World Institute for Development Economics Research (UNU-WIDER), the University of Cape Town’s Development Policy Research Unit (DPRU), and the Brookings Africa Growth Initiative, that provides an analytical basis for policy recommendations and value-added guidance to domestic policymakers in the fast-growing economies of Africa, as well as for the broader global community interested in the development of the region. The six papers, covering Mozambique, Nigeria, Kenya, Ghana, South Africa, and Ethiopia explore the key constraints facing African economies as they attempt to maintain a long-run economic growth and development trajectory.