Much of the world is entering into mega-regional free trade areas (FTAs). Indeed, October 5, 2015 marked the ratification of the Trans-Pacific Partnership (TPP), the most significant trade agreement in recent years. Now, the United States is currently negotiating with the European Union toward the establishment of the Transatlantic Trade and Investment Partnership (TTIP). When combined, the TPP and the TTIP will cover 60 percent of global GDP.

But where does that leave sub-Saharan Africa, as no country in the region is party to these agreements? According to Foresight Africa issue brief author, Brookings Global Economy and Development Senior Fellow Joshua P. Meltzer, these exclusions will impede African businesses’ ability to compete on a global scale.

The TPP and sub-Saharan Africa

The infographic below (grabbed from this year’s Foresight Africa) shows the existing disproportionate trade distribution (in terms of exports) among TPP countries, sub-Saharan Africa, and the rest of the world. Figure 1 shows the proportions of exports of the TPP countries (and sub-Saharan Africa) on the left to the destinations on the right. Very little goes to Africa and, with the signing of the TPP in 2015, the proportion going to TPP countries will only grow. Table 1 shows those shares in more detail.

Figure 1. The flow of exports from current TPP countries and sub-Saharan Africa. 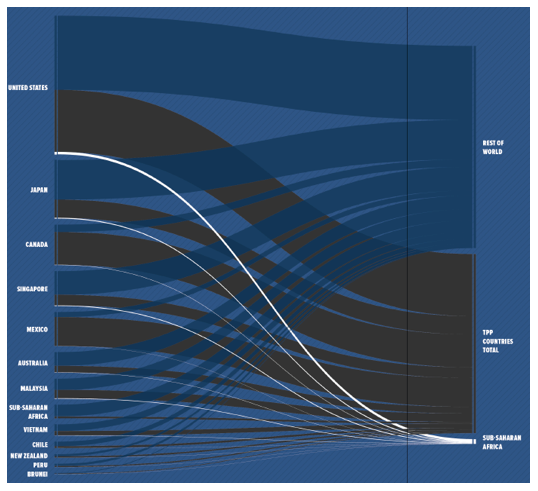 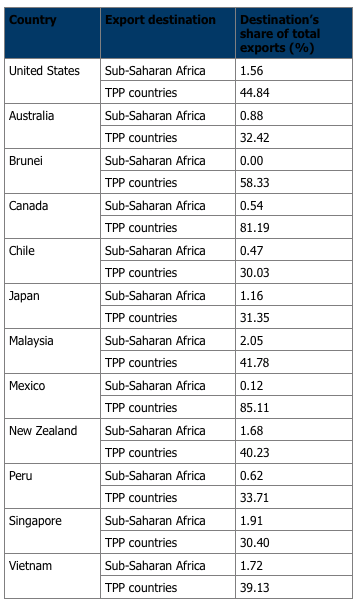 Sub-Saharan Africa will fall behind for many reasons. First, the preferential access offered through the TPP will lead to relatively higher tariffs for trade with Africa. A second reason is, as Meltzer argues in his brief, new, tougher labor, environment, and health and safety standards enshrined in the TPP will become de facto global standards, and African businesses may struggle to meet them. African trade may also suffer because of its growing dependence on the services sector and new rules around global supply chains, on which Meltzer elaborates in Foresight Africa this year.

These changes will happen despite the fact that the African Growth and Opportunity Act (AGOA) was reauthorized in 2015 and extended to 2025. Yes, AGOA is the cornerstone of the U.S.-African trade relationship, but in this evolving trade environment and the so-far “underutilization” of AGOA, sub-Saharan African will still fall behind. In fact, Foresight Africa viewpoint contributor Africa Growth Initiative Nonresident Fellow Witney Schneidman describes the legislation as an “underutilized resource,” as the legislation provides duty-free access to many manufactured goods—notably textiles. Indeed, this underutilization also hurts manufacturing jobs, the percentage of which lies around 6 percent, a figure that has remained unchanged in decades.  Without country-led efforts to create AGOA strategies, beneficiary countries won’t be able to truly capitalize on the advantages the legislation offers.

For more on how the mega-regional trade agreements will affect African trade in the years ahead, make sure you check out
Foresight Africa: Top priorities for the continent in 2016
and join the conversation on Twitter using #ForesightAfrica.

Figure of the week: Trends in mergers and acquisitions in Africa

Good news, Africa is creating jobs—but the narrative is complicated