As President Obama said during his recent address at the African Union, “There’s a lot that I’d like to do to keep America moving. But the law is the law, and no person is above the law, not even the president.”

This sentence, uttered during his speech to the African Union last month, summarizes President Obama’s message to Africa when it comes to the need for strong institutions. In his speech he highlighted that the first president of the United States, George Washington (1789-1797), refused to run for a third term in 1798—during the nascent years of the republic—despite popular acclaim and instead stepped down to ensure there was peaceful transition and the principles of democracy upheld. South Africa’s Nelson Mandela did the same thing.

In 1940 President Franklin D. Roosevelt, however, in an unprecedented move in U.S. history—and about a century and a half after George Washington—sought a third and a fourth third term and won. Those were extraordinary times some would say: World War II had begun. However, shortly before the 44th president of United States was born, and before many African countries got independence in 1951 the United States Congress moved to ratify an amendment to the U.S. constitution formerly limiting presidential terms to two. The amendment was passed in 1947 and took four years to ratify.

Thus, it took the U.S. from George Washington to Harry Truman, 1797 to 1951, to strengthen and perfect this institution. Thus, even in America building institutions takes time, but, once built, they are respected: No one has since dared to change the 22nd Amendment, even as America continues to strive to build a more perfect union.

Africa’s early experience with representation: A timid one

The concept of elected representation (representative government) began on the continent at independence towards the end of the 1950s for some and the 1960s for most. As Figure 1 shows, from the 1950s to the 1980s the number of uncontested (single party) elections increased substantially. The continent went from having less than five uncontested elections in the 1950s to over 37 uncontested elections by the 1980s. One could term this period “the learning years,” as countries were experimenting with the concepts of the ballot box and representative rule. By the end of 1980 almost all countries on the continent had organized elections at least three times, and the moment was ripe for more inclusive and contested representation. Citizens began to demand more representation. But leaders remained reluctant for the most part to opening up. Unrest set in. 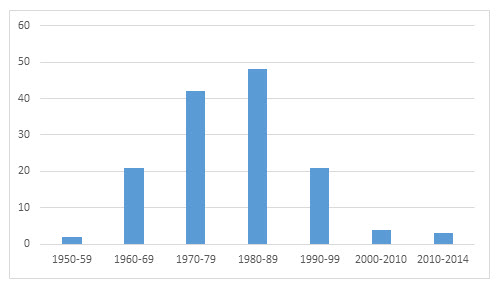 From uncontested elections to coups: A tortuous transition

Figure 2. Number of coup d’états in sub-Saharan Africa by decade 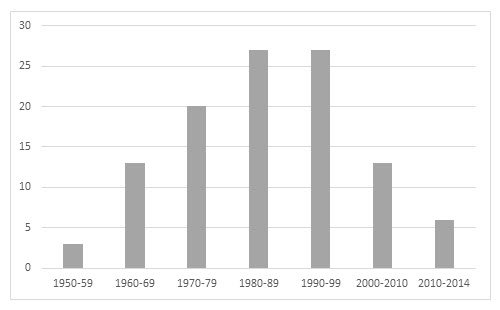 Figure 3. Number of multiparty/contested elections in sub-Saharan Africa by decade 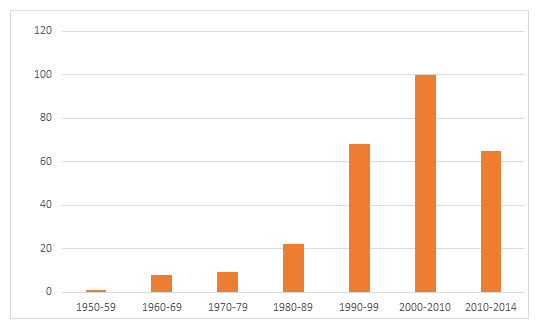 In addition to the intransience of many leaders, another great and growing fear is that of backsliding. Leaders elected through an open and contested process, with clear and transparent constitutions in place, are beginning to question the need for term limits. There is a groundswell of initiatives across the continent of presidents trying to change constitutions not to bring more stability to the system but to regress. In Burkina Faso and Burundi these attempts have led to civil unrest and the loss of lives. These are the groups to whom President Obama was referring to when he now famously said to the African Union, “I think if I ran [again], I could win. But I can’t.”

Over the next year, Africa will see elections in the Democratic Republic of the Congo, Uganda, Republic of the Congo, Rwanda, Gabon, Chad, and Equatorial Guinea—all countries where presidents have met their term limits. How Africa defines this decade will depend on what happens in all these countries and many more with elections before the end of 2020 in which sitting presidents will have met their term limits.

First, while many countries have moved from single party to peaceful, contested elections there is still significant dominance of incumbents winning elections. This trend implies that the competitive process is not ripe enough to deliver the results contests are meant to produce.

Third, initial conditions seem to matter: Countries that launched competitive transition processes shortly after independence—like Mauritius, Zambia, and Botswana—have succeeded in keeping the momentum and have not been plagued by coups or other disruptions in leadership. Whereas countries like Liberia that launched mock contestations where the same leader was reelected ended up with coups before settling once again into competitive election processes.

Fourth, looking ahead to the rest of this decade, there are ominous signs that citizens in countries where a truly competitive process has not taken root will be fertile ground for popular uprisings and instability—including, unfortunately, terror. As President Obama recently noted, “If we sacrifice liberty in the name of security we risk losing both.” This truth is all the more relevant in countries with rapidly expanding youth populations, low literacy rates, and rising unemployment.

The continent has clearly leap-frogged into the process of contested elections and representation. What the United States took a century and a half to accomplish, some African countries have accomplished in less than 40 years. The process has been, at times, tortuous; there is still backsliding in some countries and inertia in others. However, clearly emerging is a resolute move towards more contested elections and leadership transitions.

Importantly, over the next five years the role of citizens, the role of African Union, and leadership demonstrated by other countries like the U.S. will be critical in determining how Africa’s leadership transition history evolves. Will the African Union succeed in adopting legislation that makes term limits binding? Will Western countries support civil society in isolating leaders who attempt to circumvent their constitutions? Will President Obama take positive measures to ensure the hopes and dreams of so many of the youth that listened to him come to pass when the sun sets on this decade?

In the meantime, while we celebrate countries like Mauritius, Botswana, Cape Verde, Benin, Zambia, Botswana, Kenya, Ghana, and many others, we cannot lose sight of the fact that there is still a lot more to do to perfect the institutions for representation in these countries and on the continent as a whole. To protect and strengthen these institutions a number of challenges need to be tackled such as dealing with the  cost of contested elections, developing transparent and inclusive electoral codes, clarifying the election process (in many countries election day is not set in the constitution),  perfecting the voting systems, building credible  electoral commissions, and most of all protecting the will of the people—first to exercise their civic duty to participate in the contest and second to accept the results.  Here Africa can learn from itself but also from other countries and could even provide solutions for the world to employ. The African Union, like the U.S. Congress of 1947 can take on these challenges, and with the youth of Africa by her side, an Africa with leaders chosen by the people with dignity and peace underpinned by strong institutions will emerge.

For more on leadership transitions on the African continent, see the Africa Growth Initiative’s

African democracy in 2022: 3 elections to watch