The African Growth and Opportunity Act (AGOA), which was signed into law by President Bill Clinton in 2000, is one of the important pieces of legislation defining the commercial relationship between the United States and sub-Saharan Africa. AGOA’s duty- and quota-free provisions have been instrumental in supporting African countries in accessing the American market, and the legislation is credited with creation of thousands of jobs in some of them. The current AGOA legislation expires on September 30, 2015, and Washington is abuzz with discussions and congressional hearings on its renewal. African governments have mobilized their diplomats in Washington to advocate for the speedy renewal of the legislation. However, while there is broad bipartisan and bicameral support to renew AGOA, there are many concerns about the effectiveness of the legislation in achieving the intended objectives.

Probably the most important concern over AGOA relates to its utilization by eligible countries in terms of the composition and volume of the products exported. Crude oil dominates AGOA imports: In 2014, crude oil accounted for 46 percent of all AGOA imports, and energy-related products more generally represented 67 percent of all AGOA imports.[1] In fact, exports of energy-related products generally are associated with limited job creation and do not contribute to transformation of economies. Furthermore, African countries do not necessarily need preferences to export those products. In addition, although there has been a rapid increase in the volume of non-energy imports, only a small number of countries have taken advantage of the preferential treatment. In fact, most of AGOA non-energy imports are dominated by South Africa, which accounts for 60 percent of this category. Other countries with sizeable shares of AGOA non-energy imports include Kenya, Lesotho, Mauritius, and Swaziland. Imports from most other countries are very few in number. Table 1 below shows African countries and the value of non-energy AGOA imports.

Thus, in reality, South Africa performs relatively poorly in AGOA utilization. Similarly, Kenya, ranked second based on aggregate data, also scores poorly (a distant fifth) based on the normalized data. Importantly, the data also reveals that in other African countries, AGOA utilization is extremely low. For example, for Uganda, which is in the middle category in terms of aggregate values, AGOA imports are equivalent to 4 cents per capita and 10 cents per unit of labor. In most of the other countries, non-oil imports account for less than 1 cent per capita.

Another shortcoming with using the aggregate values presented above is that these values overestimate the extent of AGOA utilization because the data does not capture the value added by the exporting countries.  This is a general problem with international trade data and not just with AGOA imports.  Capturing value added is particularly important today when a large proportion of international trade is comprised of parts and components rather than just final products. In the case of apparel, which comprises one of the most important non-oil AGOA imports, many components of the final product are imported by African countries from outside the continent. For example, consider a case where Kenya imports fabric worth $10,000 from Malaysia and manufactures sportswear worth $30,000 for export under AGOA.  In this case, the value added by Kenya is $20,000 while the value of U.S. imports from Kenya is recorded as $30,000. Thus, the aggregate value of AGOA imports overestimates the true utilization.

The failure to capture the value added in cases where African countries are involved in the production of parts and components that go into the final production of exports in another AGOA-eligible country also results in poor measurement of utilization. Consider a case where Lesotho exports leather products worth $10,000 to South Africa. In turn, South Africa manufactures car seats worth $30,000, which are exported to United States.  In this case, Lesotho’s indirect utilization of AGOA is not captured while South Africa’s recorded utilization of AGOA is higher than it actually is. Thus, with the deepening of regional integration in Africa and subsequent increased participation in regional production value chains, the available data of AGOA utilization becomes increasingly meaningless.  In short, if we want to capture the true extent of AGOA utilization by the various eligible countries, we need better data that captures value added at the country level.

Clearly, these data challenges have consequences for how policymakers, African and American, should approach AGOA’s renewal. When deliberating on these issues, analysts and policymakers should take care to keep the following thoughts in mind: 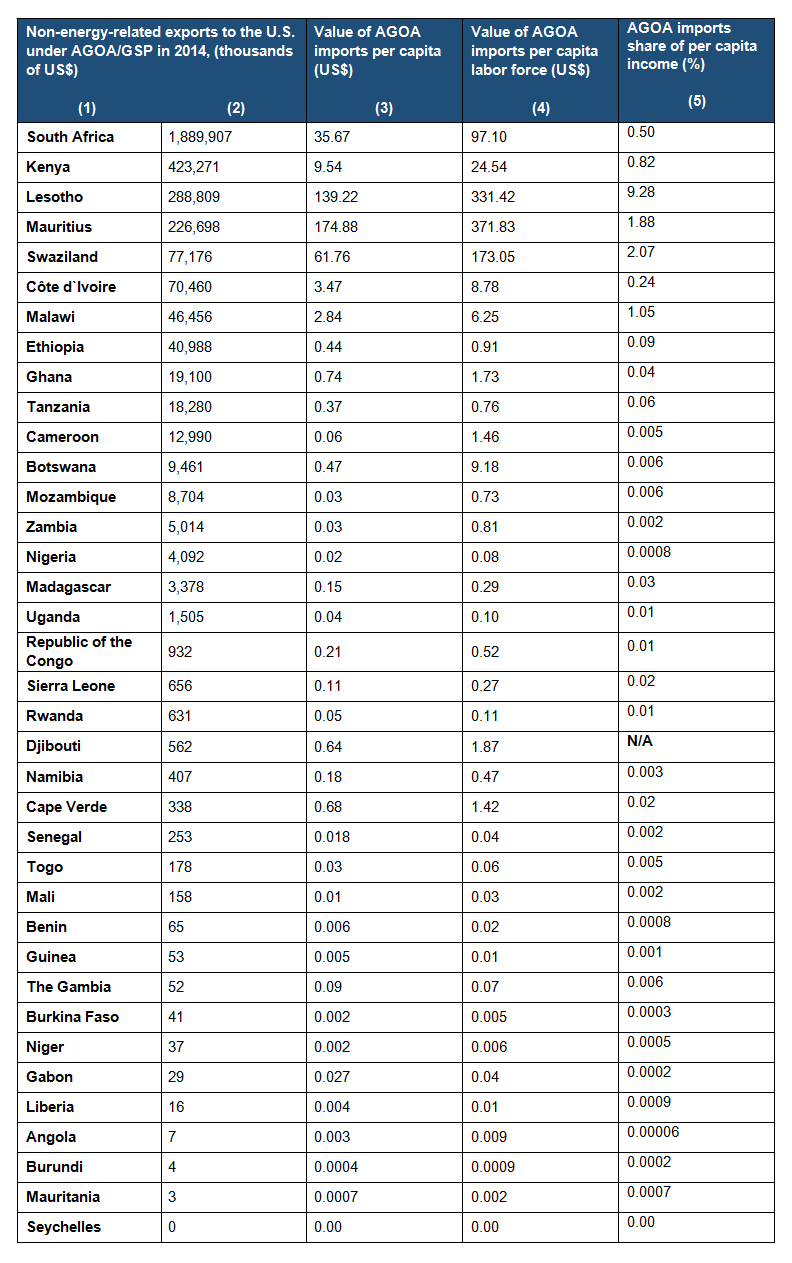 Data on income, labor force and population are from the World Bank DataBank (http://databank.worldbank.org/data/home.aspx) for the latest available year (2013).

[1] Crude oil is classified under HTS 4-digit category 2709 while energy-related products are defined as HTS chapter 27.