On October 25, the Tripartite Sectoral Committee of Ministers announced that the Tripartite Free Trade Area (TFTA) covering three Regional Economic Communities – the East African Community (EAC), the Southern African Development Community (SADC) and the Common Market for Eastern and Southern Africa (COMESA) will be launched in mid-December at the Tripartite Summit of Heads of State and Government in Cairo, Egypt. Talks on the project among the 26 countries ranging from Egypt to South Africa, were launched in 2008 and endorsed in 2011. The TFTA will have a combined population of 625 million people, and an aggregate GDP of US$1 trillion covering 58 percent of the continent’s economic activity. The immediate objective is to reduce the thickness of borders across the continent so as to raise inter-regional trade across the continent, now standing at just 12 percent to total trade. An action plan released by the African Union says that the TFTA would be followed by a continental customs union forming in 2019.

According to the WTO, in 2010, the 58 African countries were involved in 55 Preferential Trade Agreements (PTAs) of which 43 were South-South PTAs. PTAs (RECs or Regional Economic Communities is the usual acronym used when discussing regional integration in Africa) are good politics. Broad evidence suggests that economics and politics are complements rather than substitutes (as argued by defenders of multilateralism): RTAs reduce the probability of war through two channels: (i) by increasing the opportunity cost of war; and (ii) by reducing information asymmetries as partners know each other better. But to survive, PTAs must extend beyond unfilled good intentions and have a sufficiently sound economic basis, the focus of this note.

So far success on the economic front has been modest, not least because of the great diversity in memberships across PTAs. Members include resource-rich and resource-poor (see Figure 1), coastal and landlocked (15 landlocked countries in Africa), large and small, artificial borders, and many ethnic groups and languages. Figure 1 shows that the EAC is the REC with the smallest disparities in per capita exports of rent-generating natural resources. It also happens to be the REC—along with UEMOA—where integration has been ‘deep’, a five-member customs union operational since 2009.

Figure 1: Box-plot of Per capita exports of Fuels, Ores, and Metals exports by RTA groups (2012 US$) 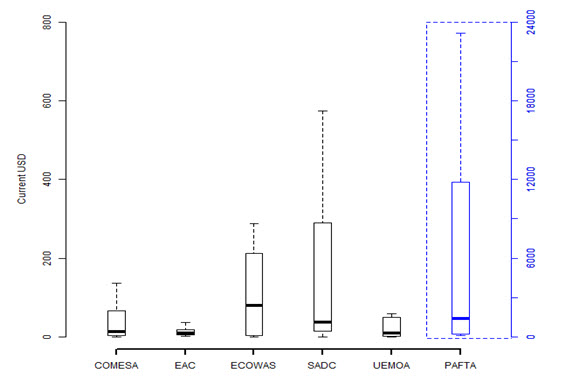 The very different interests across partners in each REC has strengthened countries’ insistence on the “respect for the sovereignty and territorial integrity of each state and the inalienable right to independent existence,” as written in the Organization of African Unity (OAU) charter of 1963. Commitment to pan-Africanism was weak during the first post-colonial wave of regional integration efforts, and has remained so during the more outward-oriented second wave of PTAs. Can the TFTA provide the glue needed to integrate African economies more deeply? Several clouds are on the horizon.

The ‘one-size-fits-all’ constraint. The TFTA is to get around the overlap in membership across PTAs that has prevented ‘deep integration’ which has also been slowed by large membership. For example, Zambia is both a member of the COMESA Customs Union (CU)—which requires applying Common External Tariff (CET) to non-members—and of the SADC FTA, putting the country in conflict over its trade policy choices. The large membership in the TFTA (and a fortiori for a continental customs union) exacerbates the “one-size-fits-all” constraint imposed by the desire (and necessity) of achieving convergence in policies to achieve ‘deep integration’.  The variable geometry approach adopted may help build support, but at the cost of delaying the deepening of integration since what was intended to be a ‘single undertaking’ to establish a proper FTA that, in the end, will allow the co-existence of different trading arrangements with small integrating effects.

Africa’s linear model of integration has slowed the pace of integration. The TFTA is to be implemented in two sequences: phase one is to focus on tariff liberalization, rules of origin (RoO), trade remedies, and customs and transit procedures; and phase two will address trade in services and other issues such as intellectual property, competition policy, and trade competitiveness. This is the linear model of integration that has been followed in Africa until now. It has been criticized for neglecting ‘behind-the-border’ measures that have been a break to intra-regional trade and of missing the opportunity to open markets in services which are now essential for ensuring competitiveness in goods markets where outsourcing has been rising rapidly.

Phase one is to be officially concluded in December 2014 after the 3rd Summit of Heads of State and Government which will see the signing of the Declaration on the Conclusion of Negotiations on Phase One – Trade in Goods as the decision takes “into account the fact that the majority of the Tripartite Member/Partner States have made ambitious tariff offers.” While the decision to operationalize the free trade area by the end of this year is to be welcomed because it will jump-start negotiations on trade in services, much will remain to be done to reduce barriers to trade in goods, especially regarding the adoption of rules of origin that do not impede trade excessively.

Rules of origin. In phase one, the COMESA-EAC-SADC troika is to reach agreement on trade remedies and a dispute settlement mechanism. They also face the challenge of harmonizing the currently very different RoO across the three groupings. Up to 56 percent of RoO are different across the three RECs. Negotiators have decided to adopt a line-by-line approach (or product-specific RoO (PSRO)) to resolve this problem. This approach is a quasi-guarantee that the most restrictive PSRO will be adopted since PSRO are invariably “business-owned” rather than “business friendly”(the EU still has over 500 different PSRO), leading many to conclude that preferential trade amounts to giving with one hand (preferences) and taking away with the other (restrictive PSRO). For example, the main benefits of the Africa Growth and Opportunity Act (AGOA) was the unilateral decision by the U.S. to simplify the triple-transformation requirement for textiles & apparel (T&A) to a single-transformation rule allowing AGOA beneficiaries to source inputs from non-preferential sources. This relaxation has been estimated to amount to an increase in exports of T&A six times greater than the simple removal of tariffs. Difficult as it may be to reach consensus, negotiators could take inspiration from the simple and transparent RoO requirements in ASEAN where a wholly obtained requirement applies for unprocessed agricultural products and a single across-the-board rule of a 40 percent local content for manufactures (or a change of tariff classification if that rule is deemed too constraining).

With the exception of South Africa and Egypt, TFA membership is largely composed of small fragmented and often isolated economies with resources distributed very unequally among them. In addition to political benefits, on economic grounds, this makes for a compelling case to integrate regionally to reap efficiency gains, exploit scale economies, and reduce the thickness of borders. But the distribution of gains from ‘deep integration’ will be very unevenly distributed, potentially leading to compensation mechanisms that will be distortionary (e.g. exceptions hidden under restrictive PSRO and other opaque measures) as occurred under the first wave of regional integration in the immediate post-independence period.

Equally important, until recently at least, regional integration in Africa was founded on a 20th century exchange of market access at the expense of outsiders. With the reduction in trade costs and the subsequent fragmentation of production, 21st century regionalism is about a new bargain: an exchange of domestic market reforms for FDI which brings home the service activities necessary to participate in the global value chain. In this new environment, where trade is trade in tasks and increasingly involves an exchange of intermediate goods, protection (or exchange of market access) amounts to preventing oneself from participating in global outsourcing. Indeed, Asian regionalism has been characterized by ‘race to the bottom’ tariff-cutting to bring about the services needed to diversify and participate in international production networks. It is against this changing background that the TFTA has to be evaluated.