Editor’s Note: The U.S.-Africa Leaders Summit blog series is a collection of posts discussing efforts to strengthen ties between the United States and Africa ahead of the first continent-wide summit. On August 4, Brookings will host “The Game Has Changed: The New Landscape for Innovation and Business in Africa,” at which these themes and more will be explored by prominent experts. Click here to register for the event.

On the second day of President Obama’s three-day U.S.-Africa Leaders’ Summit, the U.S. Department of Commerce and Bloomberg Philanthropies will convene the inaugural U.S.-Africa Business Forum.  This event represents an unprecedented occasion for U.S. and African heads of state to meet with business leaders and discuss ways of catalyzing new, continent-wide trade and investment opportunities.

As the summit draws closer, the Brookings Institution’s Africa Growth Initiative (AGI) has reviewed and compared economic relations between sub-Saharan African countries and some of their major commercial partners: the U.S., China, the European Union (EU) and Japan. In this second installment of the Africa Leaders Summit series, AGI examines the trends of U.S. foreign direct investment in the region and proposes potential topics of focus for the forum, to help inform the participants on the key investment issues. 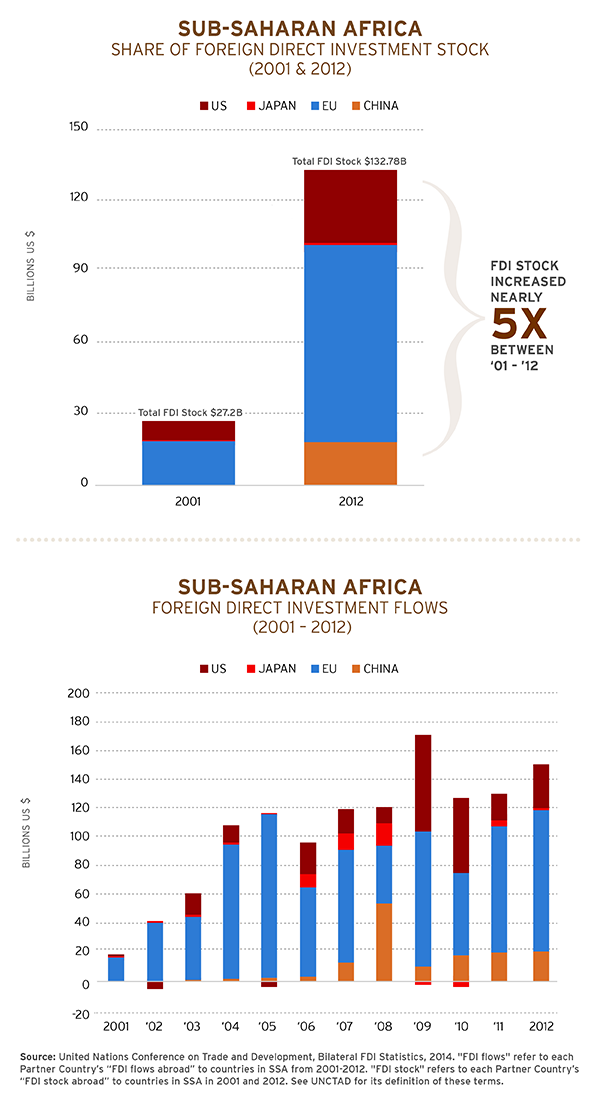 FDI to sub-Saharan Africa has increased substantially, in part driven by China, but remains low compared to other regions.

Since 2000, global FDI stock in sub-Saharan Africa has increased dramatically, from over $33.5 billion to $246.4 billion in 2012. According to analysis of UNCTAD’s Bilateral FDI Statistics (2014) [1], the EU, China, Japan and the U.S accounted for approximately 54 percent of the stock of FDI in the region in 2012. South-South investment was also important and included partners such as South Africa (9 percent), Singapore (6 percent), India (5 percent) and Mauritius (5 percent).

Five EU member countries —France (38 percent), the U.K. (31 percent), Germany (8 percent), Belgium (8 percent)—accounted for over 80 percent of the EU’s share of FDI stock in the region. While the EU is considered the largest of the four partners in terms of FDI stock, when the EU is disaggregated by country, the U.S. and France were the largest sources of FDI stock for sub-Saharan Africa in 2012 at $31 billion each, followed by the U.K. with $25 billion. Yet, even though the U.S. is one of the top contributors of FDI stock to sub-Saharan Africa, less than 1 percent (0.7 percent) of the U.S.’s global FDI stock abroad is destined for the region. The U.S primarily invests its $367 billion of FDI in Europe (55 percent), Latin America (13 percent), Canada (8 percent), and other developed countries such as Australia, New Zealand, Israel and Japan (13 percent collectively). Similarly, the EU and Japan direct only 0.8 and 0.2 percent of their FDI, respectively, toward sub-Saharan African countries abroad.  China, on the other hand, invested 3.4 percent of its FDI stock abroad in the region in 2012. 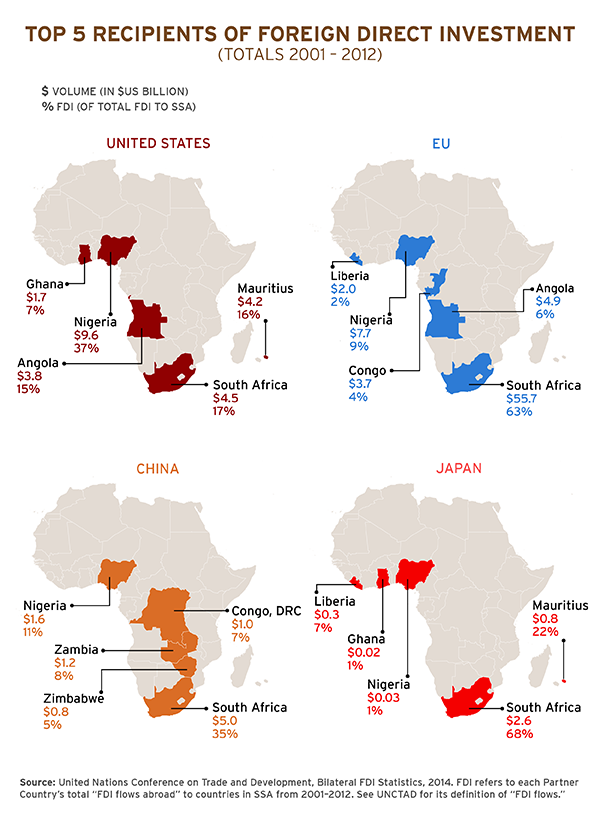 Predominantly resource-rich countries—South Africa with its precious metals and minerals as well as Nigeria with its oil reserves—receive a majority of FDI, indicating that natural resources remain a significant factor in attracting investors to the continent. For example, the main sectors in which the U.S. and China both invested in sub-Saharan Africa were the mining and extractive industries, comprising approximately 58 percent and 30.6 percent of each country’s FDI stock to the region, respectively, in 2011. [2] However, financial services, manufacturing and construction also received notable shares of FDI stock from both countries. China’s reported FDI composition was more diversified than the composition of U.S. FDI, with 19.5 percent in financial services, 16.4 percent in construction, 15.3 percent in manufacturing, and the remaining 18.2 percent in business and tech services, geological prospecting, wholesale retail, agriculture and real estate. U.S. FDI was concentrated 12 percent in finance and insurance, 5 percent in manufacturing and 25 percent in other industries. Despite this emphasis on mining and extractive industries in 2012, according to the World Investment Report of 2014, international investors are increasingly looking to new opportunities in consumer-oriented sectors (such as information technology, foods, financial services and wholesale retail) that target the region’s expanding middle class.

Along with the appetite for mineral resources, energy and other returns that drew massive investment into Africa, we compared the status of the quality of governance in the countries where the U.S., Japan, the EU and China invested in 2012.

Investing in countries with relatively higher governance performance can reflect at least three concerns: (i) the investors’ level of risk aversion, (ii) the pursuit of democratic principles or non-ideological relationship based on non-interference, and (iii) the level of pressure from global consumers, who are increasingly scrutinizing their choices along the global value chains according to the respect of governance indicators, such as respect for human rights.

We used the World Governance Indicators [3] in 2012 produced by Kaufman, Kraay and Mastruzzi, which cover six dimensions of governance: voice accountability, rule of law, government effectiveness, political stability, regulatory quality, and control of corruption. The governance index ranges from -2.5 (weak) to 2.5 (strong governance performance).  In 2012, Botswana and Mauritius top the list with a score of governance performance of 0.71 and 0.66 respectively, while Zimbabwe and the Democratic Republic of the Congo (DRC) are at the bottom with a respective score of -1.35 and -1.74. 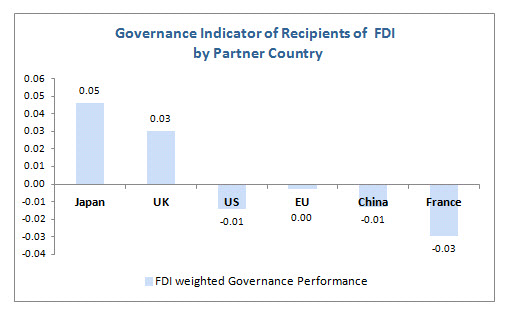 Our computed levels of average governance indicators (weighted by the share of total  FDI flows  in the host countries between 2001 and 2012) are comparable across the EU, U.S. and China. Japan’s investment is concentrated in South Africa where the overall governance performance is high. When we disaggregated the EU by individual member countries, France has the largest share of investment in countries with the lowest levels of governance.

Given its focus on oil-producing countries with low governance levels, the U.S. is comparable to other regions. Importantly, however, the U.S. Dodd-Frank Act, requires public dis­closure of payments at the project level from listed com­panies, involved in extractive industries. Other initiatives require companies to eliminate conflict minerals from their supply chains. For instance, the use of coltan originating from the DRC and neighboring countries is effectively banned. UNCTAD data actually show no record of U.S. investment stock in the DRC from 2007 onwards. The EU has a similar set of policies manifested in its Accounting and Transparency Directives. Furthermore, the U.S., along with China, the EU and Japan, is a participant in the Kimberley Process, which has banned the sale of “blood diamonds.” Other transparency initiatives supported by the U.S. include the Extractive Industries Transparency Initiative (EITI), the International Tropical Timber Organization (ITTO) and the International Chamber of Commerce (ICC) Rules on Combating Corruption. [4]

Bilateral investment treaties (BITs) are agreements signed between countries aiming to promote FDI by ensuring certain guarantees [5]—against expropriation, for example—for investors in unstable business environments. BITs are low-cost options to encourage business climate reform while simultaneously signaling investor commitment to host countries and providing them with policy space to design and implement their development agendas. These BITs and other international investment arrangements (IIAs) have proliferated widely over the past 50 years: the total number of BITs globally reached 2,902 [6] in 2013 with the number of sub-Saharan Africa-specific BITs comprising at least 300 of these treaties.

According to Benjamin Leo from the Center for Global Development, it is in part due to the U.S.’s limited “negotiating capacity”—it has only a few foreign commercial officers on the ground to negotiate these treaties, whereas the EU and China have distributed delegations of commercial attachés at offices and embassies in nearly all African countries. The U.S. has also focused its efforts on establishing trade and investment framework agreements (TIFAs) in the region, which provide a forum for engaging in discussions on trade and investment, but do not confer protections on investors or indicate a serious commitment to host countries since they are not legally binding. Furthermore, the U.S. Model BIT, which it uses in its negotiations, is a very dense and complicated legal document, which is difficult for many countries to review and discuss without adequate legal support (that some of them lack). These compounding factors hinder the U.S. from establishing mutually beneficial investment agreements with countries in sub-Saharan Africa.

There is ample scope to expand the U.S.’s investment strategy with Africa. The U.S. funnels less than 1 percent of its FDI abroad toward the region, and it invests largely in only a few countries and sectors. While the perceived risks of investing in Africa have historically been high, rates of return have also proven to be high, averaging 11.4 percent on inward FDI for the period 2006-2011 (compared with 5 percent for developed countries) [9]. UNCTAD’s World Investment Report 2013 also reported that four of the top 20 economies with the highest rates of return on inward FDI in 2011 were in sub-Saharan Africa.

At the same time, African policymakers should engage the U.S. authorities and its private sector to:

[1] The FDI data were collected from UNCTAD’s publically available Bilateral Investment Statistics database, 2014, which provides bilateral, geographically disaggregated data on stocks and flows from 2001-2012. Our analysis specifically focused on outward FDI or FDI abroad, originating from our selected partners and destined for sub-Saharan African countries. Data on the European Union was aggregated for all EU member countries (at time of accession).

[2] Figures based on Chinese White Paper on Economic Cooperation (2013) and a 2012 CRS paper entitled “U.S. Trade and Investment Relations with sub-Saharan Africa and the African Growth and Opportunity Act.” Data for the EU and Japan were not available.

[3] The Mo Ibrahim Foundation also produces governance performance indices specifically from sub-Saharan African countries that monitor changes in 182 indicators of governance from judicial process independence to equity of access to public services. Their index scores range from 0 to 100, where 100 is the best possible score. Mauritius (83) and Botswana (78) had the strongest governance performance while the Democratic Republic of the Congo (31) and Eritrea (32) had the worst performance.

[4] The U.S. is a candidate country for EITI and is also a supporting government stakeholder in the initiative, but is not yet on record as being an EITI compliant country.

[5] According to the Office of the United States Trade Representative, these include most-favored-nation treatment for investors, protection against expropriation and/or provision of adequate compensation, the right to transfer investment funds using market-based exchange rates, limitations on performance requirements, the authority to choose their top managerial personnel and access to international arbitration to settle investment disputes.

[7] Data on BITs are from UNCTAD’s country-specific list of BITs, however, the Chinese White Paper on Economic Cooperation (2013) states that China has signed more than 30 BITs.

[8] This includes Benin, Chad, the DRC, Equatorial Guinea, Guinea, Madagascar, Mali, Namibia, Seychelles (not yet entered into force) and Uganda.

[10] Sustainable-development-oriented features include measures explicitly stating that that countries should not take measure to promote investment that would harm health, safety and environmental standards. They also ensure public policy space for host countries and minimize exposure to investment arbitration.

After the US-Africa Leaders Summit, the US must ensure accountability and strengthen coordination

Biden’s Africa strategy seeks to revitalize ties with the continent