The African Union summit under the theme of agriculture and food security is ending on Friday, January 31 in Addis Ababa. Two recently released reports are a good reminder that discussions in Addis should include policies to rapidly increase youth employment. The International Labor Organization’s (ILO) Global Employment Trends 2014 focuses on the “risk of a jobless recovery” and sheds a sobering light on the “Africa rising” story. The World Bank’s Youth Employment in Sub-Saharan Africa is a reminder of how urgently African policymakers need to address the challenges of providing jobs to the majority of the continent’s population.

First, let’s take a look at the numbers. We are all by now familiar with the story of the region’s rapid economic growth. Over the past 10 years, sub-Saharan Africa (SSA) grew by 5 percent per year, and, at this rate, the continent may double the size of its economy before 2030. Sadly, this rapid rate of growth has not benefited the largest share of the population. In October last year, survey data from the Afrobarometer collected across 34 African countries already pointed out that there was little change in poverty at the grassroots level after a decade of growth. Now, the ILO data show that SSA has the highest rate of vulnerable employment in the world (77.4 percent in 2013). Vulnerable employment is defined as unpaid family workers and own-account workers as a percentage of total employment.

Moreover, youth unemployment in SSA remains stubbornly high. The ILO reports that the average regional youth unemployment rate decreased from almost 13.4 percent in 1991-2000 to only 12.3 percent during 2001-2012. Although these unemployment numbers appear rather low (good data on labor markets in SSA is not easy to get), the trend indicates that unemployment is not decreasing as fast as it should (Figure 1).

Other sobering news from the ILO is that the manufacturing sector in SSA, in contrast to regions, has not been an engine of job creation. In countries such as Ghana that role is left to mining and construction. Manufacturing in SSA has been declining as a share of GDP in the last two decades. To put it simply, SSA has deindustrialized and the share of workers in industry in SSA is extremely low, at only 10 percent. Similarly, in the rapidly growing oil and gas sector not enough new jobs are being created. To make things worse, agriculture’s share of GDP has contracted in the region over the past two decades. Overall, the proportion of the working-age population in paid employment in the region is low, at only 13.7 percent (see Figure 2; note that South Asian data are biased because of the importance of women in the services sector). 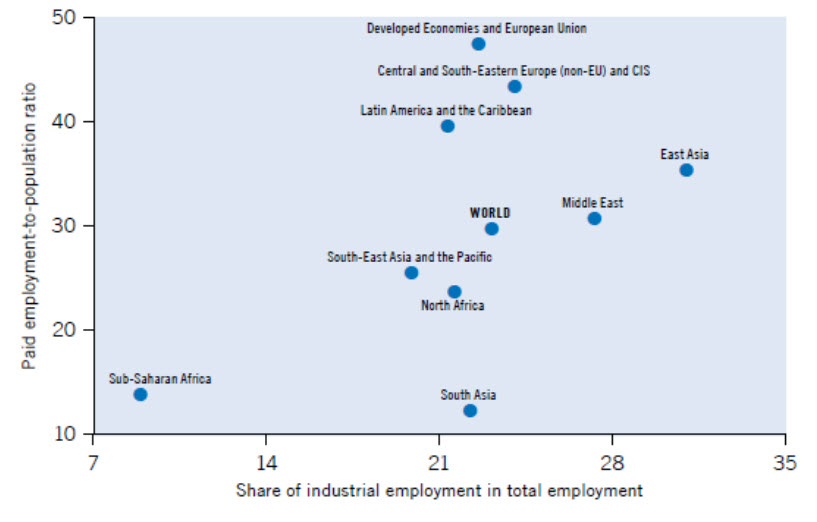 The ILO report notes that, in certain countries, almost one-quarter of young people aged 15 to 29 are now neither in employment, nor in education or training (NEET). These figures do not include SSA but one can “guesstimate” they are higher in the region.

So SSA economies have a serious problem of weak structural transformation. As noted by Dani Rodrik, SSA countries, unlike East Asian countries, have not yet been able to turn their farmers into manufacturing workers, diversify their economies, and export a range of increasingly sophisticated goods. What is worrisome is that there is not much time left for transformation. The World Bank notes that half of the region’s population is under 25 years of age. Each year between 2015 and 2035, there will be 500,000 more 15-year-olds than the year before. In contrast, the population in other regions is, or will, soon be aging. The challenge will be to transform this youth bulge into an opportunity, or risk an Arab Spring.  So far, sub-Saharan African countries have not been doing a good job at it, and time is running out fast.

Even the narrative around a middle class rising in SSA should not divert policymakers’ attention from the urgency of transforming the region’s economy to provide a sustainable and inclusive growth. Indeed, a rising middle class creates an “expectation revolution” that has to be managed.  As noted by Brookings Vice President Kemal Derviş, in Chile, Brazil and Turkey last year, the young and parts of the aspiring new middle classes in  were in the streets asking for respect, greater equality, less corruption and a greater say in their own lives.

Figure 3. The structure of sub-Saharan Africa’s population is different than that in other regions

The African Union summit under the theme of agriculture and food security, which is ending on Friday is a good time for all stakeholders to come up with some measures on how to implement policies to address these challenges quickly. In particular, well-designed policies in agriculture can help reduce youth employment in at least three ways. First, high-value crops can offer jobs to youth in rural areas (a good example is horticulture production in Kenya). Second, linkages between agriculture and manufacturing can develop when agricultural products are transformed and even exported and in the process create jobs. Third, increased productivity of staple food crops can lower food prices and real wages, thereby making the manufacturing sector more competitive.

African policymakers are aware of the challenges of a jobless growth. But it should be clear that they are running out of time, and a good indicator of that is the rapidly expanding youth bulge. Economic transformation is needed, and it is needed urgently.

Solutions will need to be tailored and, at the same time, involve many dimensions. As noted by my colleague, John McArthur, employment challenges can be broken down into typologies by predominately rural, predominately urban, and mixed between rural and urban economies. As a result, highly tailored approaches to job creation based on economy type should be the focus of African policymakers trying to improve the employment situation for young people. In addition, as noted by the World Bank report, solutions will need to be multidimensional and include increasing training opportunities or youth and addressing the quality of education, nutrition, and basic health care while also removing a whole range of obstacles that hinder progress in agriculture, household enterprises and manufacturing.