Occupy Wall Street and its companion movements throughout the world have focused attention on the top 1 percent of the income distribution, which raises the question—where do those 1 percent live?

Internal Revenue Service data shows that the top 1 percent are largely executives, managers or financial professionals, while smaller numbers are doctors or lawyers. But because the IRS data suppresses the locations of many of the very highest-income households, it isn’t actually possible to say where the top 1 percent live.

However, it is possible to figure out the locations of households with incomes of $200,000 and up (approximately the top 3 percent in 2008, the latest year for which IRS geographic data is available. Nationally the income cutoff for the top 1 percent was $380,354 in 2008). 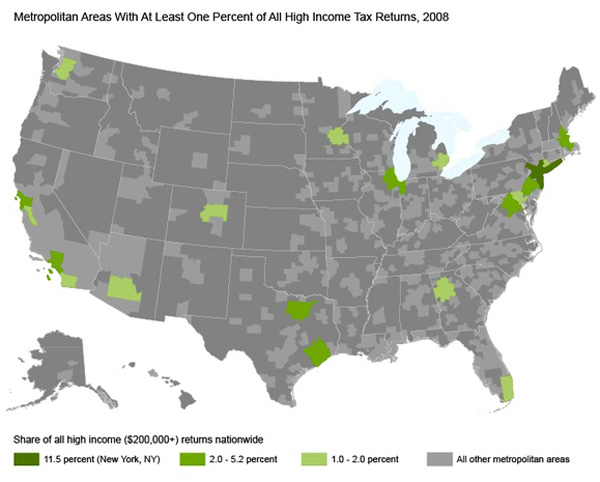 Only twenty metropolitan areas — New York, Los Angeles, Chicago, Washington, San Francisco, Boston, Houston, Philadelphia, Dallas, Miami, Atlanta, San Jose, Seattle, Minneapolis, San Diego, Detroit, Phoenix, Baltimore, Bridgeport (Fairfield County, Connecticut, is the center of the hedge fund industry and home to many corporate headquarters), and Denver — have at least 1 percent of all the nation’s very high-income households. Collectively those areas account for 56 percent of the highest-income households but for only 37 percent of all households.