Editor’s Note: On May 4, 2010, the Belgian Development Cooperation convened its 2010 “States General” Conference, which focused on the United Nations Millennium Development Goals (MDGs). Brookings Senior Fellow Daniel Kaufmann provided the keynote address, emphasizing the achievements and challenges in meeting the goals’ targets, and focusing on governance as a constraint to accelerated progress. This commentary summarizes Kaufmann’s key findings.

In 2000, the international community agreed on eight Millennium Development Goals (MDGs). Among others, countries pledged to halve extreme poverty, achieve universal education, halt the spread of HIV/AIDS and reduce child and maternal mortality rates by 2015. Ahead of the U.N.’s upcoming 2010 summit in September focused on the MDGs, many countries and aid donors have begun reflecting on the progress they have made and the challenges they still face in meeting these targets.

There is growing consensus that unless the pace of progress quickens, the world will be unable to achieve the majority of the Millennium Development Goals in five years. But the devil is in the details: does the pace of progress need to quicken everywhere and similarly across all MDGs? And what does progress depend on?

First, where do we stand on the MDGs? On average, the world has made progress in meeting targets but such progress has been very uneven.

Some regions are succeeding, while others are stagnating. On balance, the world appears to be on track to halve absolute poverty by 2015. However, progress is, in large measure, due to dramatic poverty reduction in East Asia, particularly in China. In 1990, over half of the population in East Asia, South Asia and sub-Saharan Africa lived in extreme poverty.[1]

Recently it has been estimated that only 17 percent, or 22 percent if China were excluded, of the East Asian population lives on less than $1.25 a day. But, in sub-Saharan Africa and South Asia, 51 percent and 40 percent of the population (respectively) still live below the $1.25 poverty line (Figure 1). Even though there are always debates about the accuracy of these figures (and there is a lag in reporting), over 70 percent of the population in the two regions lives on less than $2 a day.

While the world’s progress on average, largely driven by a few countries, is certainly laudable, 1.4 billion people continue to live on less than $1.25 a day and 2.6 billion live on less than $2 a day. Even in East Asia, where the largest reduction in extreme poverty has been achieved, 337 million live below the $1.25 poverty line. 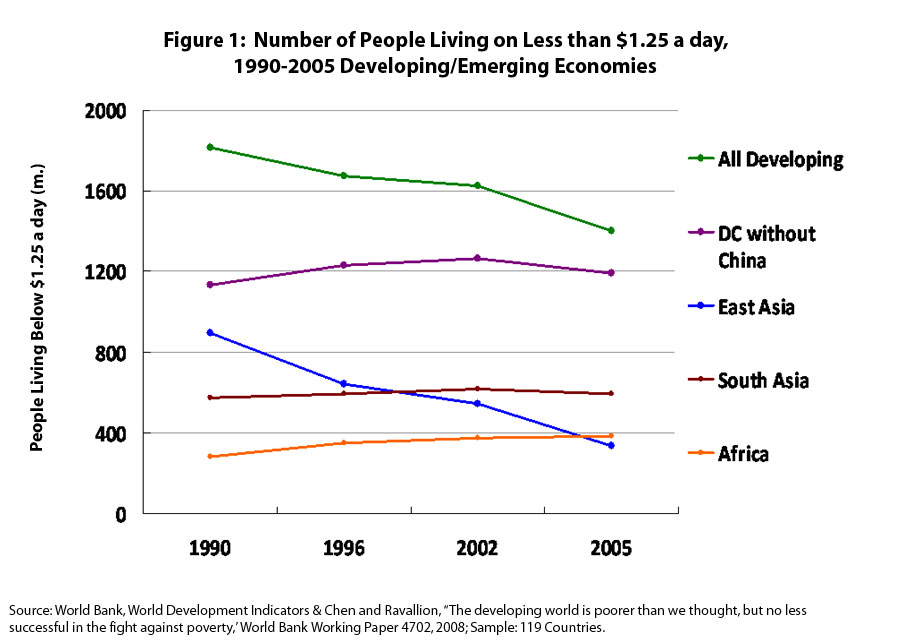 Achievement is within reach on some MDGs, but is out of reach on others. In addition to being on track to halve poverty, the world (but not necessarily all regions) is on track to achieve gender equity in primary education and to halve the number of people living without access to clean water.

On other goals the world has made less progress. For instance, maternal mortality ratios were expected to be reduced by three-quarters, from 480 deaths per 100,000 live births to 120 by 2015. By 2005, the maternal mortality remained nearly constant at 450 deaths. Similarly, the share of the population without access to sanitation was expected to be 28 percent, but by 2005 virtually half of the population remained without access (Table 1).[2]

In the years since data on most indicators was last collected, the world experienced a surge in food prices and a global economic recession.[3] Both circumstances have negatively affected progress on MDGs. It has been estimated that the rise in food prices increased the number of chronically hungry people by 75 million to a worldwide total of nearly 1 billion, while the recession has contributed to the impoverishment of tens of more millions. 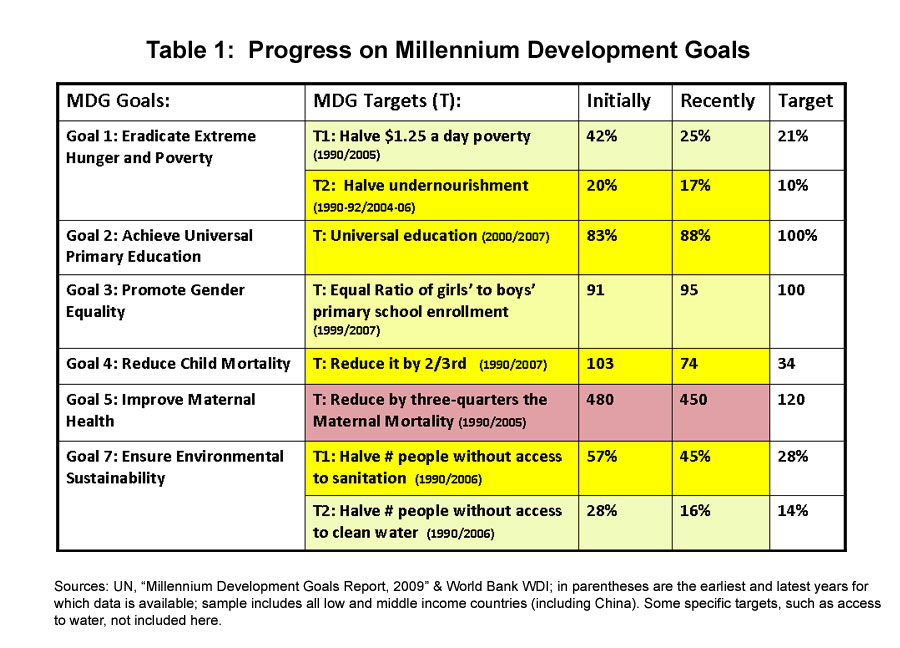 Considering that progress on MDGs has been uneven across regions and targets, and also the quality of governance is highly variable across countries, it is important to focus on the links between governance and the MDGs. This is also warranted because governance has not received its due attention in the programs to support and monitor progress of the MDGs.

Governance does matter for MDGs. Our past research suggests that when governance improves from, for instance, the extremely low level of Afghanistan, to the subpar (yet not bottom ranked) levels of Kenya (or from the subpar levels of Kenya to the many countries in the middle of the governance indicators group, such as India), infant mortality on average declines by two-thirds and incomes rise three-fold in the long run. Thus, poor governance in many countries can significantly constrain their progress on MDGs (Figure 2). 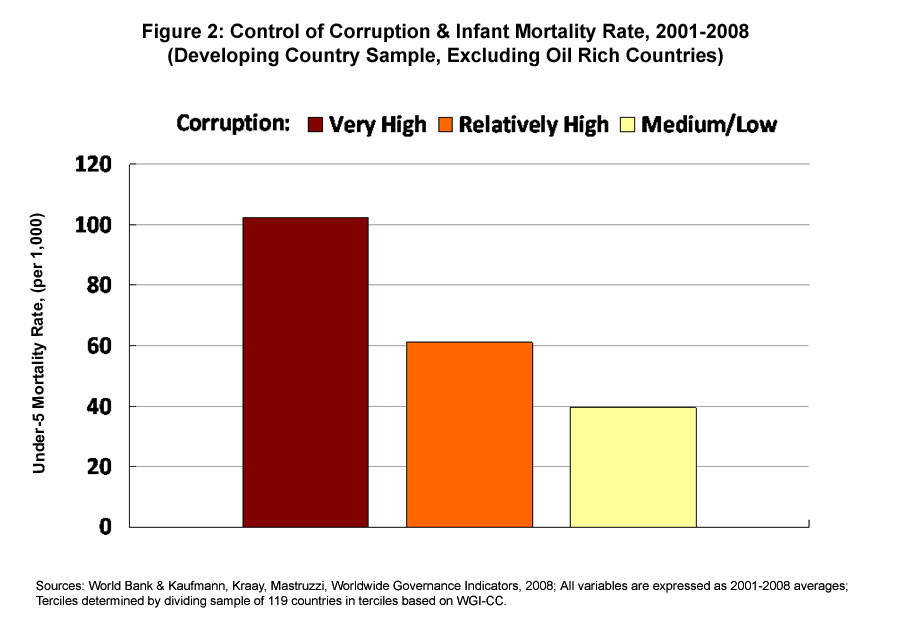 Non-traditional dimensions of governance also affect the MDGs. Improvements in public-sector financial management alone will not ensure good governance and progress on goals. Non-conventional (for many donors) aspects of governance, such as freedom of the press and human rights also influence development. The strong relationship between poverty and gender rights is particularly striking.

Considering the slow progress on gender-related goals, much more attention ought to be paid to gender rights (Figure 3). Research shows that female empowerment, education and income help reduce child and maternal mortality rates. Press freedom also impacts development (Figure 3). For instance, in Uganda the portion of allocated public expenditure that reached schools rose from 13 percent in 1991 to nearly 95 percent in 1999 as a result of increased government transparency and public accountability.

Thus aid is necessary, but alone is far from sufficient. Research has shown that aid can be effective when there is satisfactory governance in recipient countries. Studies have found that, among others, primary school enrollment and child mortality outcomes are also conditioned by governance.[4] Thus, increasing aid will not ensure progress on the MDGs. Investment in areas that impede the effective allocation and efficient use of funds, such as governance, may make sense. 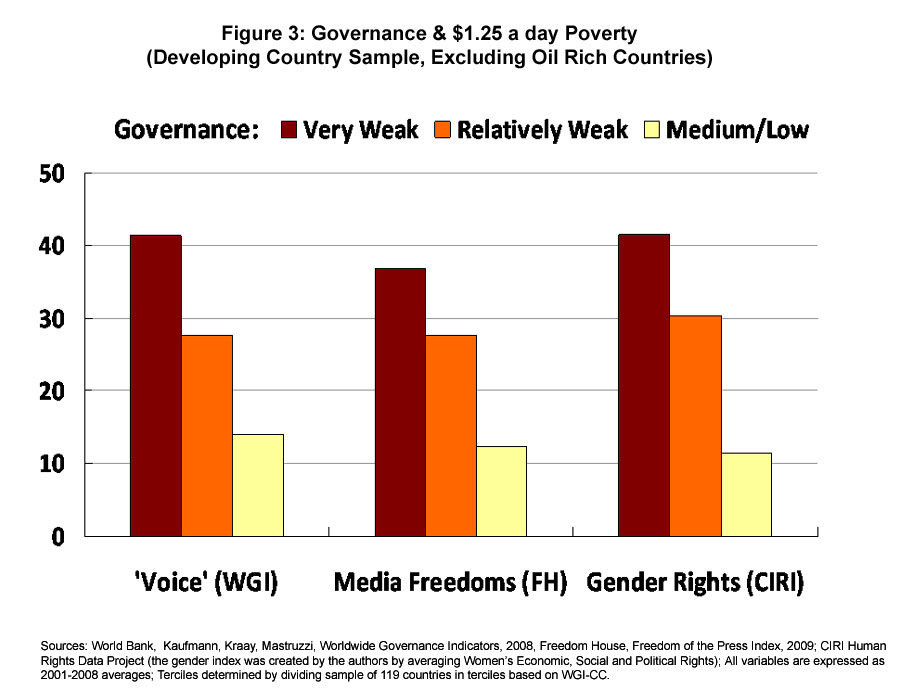 Governance is not only paramount for recipient countries, but it is also a key factor among the richer donor countries and their aid agencies.

Honoring aid commitments is important. Meeting the MDGs is not only ambitious, it is also costly. Therefore in 2000, donors pledged to increase foreign aid to 0.7 percent of their Gross National Income (GNI). Unfortunately, the international community has fallen short of this target. In 2008, donors provided only 0.3 percent of GNI on average. Donors also pledged to provide at least 0.2 percent of GNI to the poorest countries, but currently the average is just 0.06 percent. Meeting these aid pledges could help donors channel aid to those countries struggling most with the MDGs and to sectors that may be constraining progress.

The allocation of aid is also crucial. Providing governments with aid to increase health expenditure may improve child mortality rates, but only if the money is efficiently and transparently allocated. Further, additional funds provided directly to MDG-related sectors (such as to health costs in urban settings, which many aid donors provide) may not always be as effective as some additional funding to neglected sectors (such as infrastructure or governance, which constrain progress for development in general, and for attaining those health-related and other MDGs in particular).

Development aid is not an island. The recent financial crisis has shone a spotlight on the impact of economic policies of industrialized countries on the rest of the world. The recession has resulted in the impoverishment of millions of more people. Responsible governance and policies in industrialized countries matter for development and the MDGs at least as much as donor aid itself.

Additionally, agricultural subsidies in industrialized countries continue to hamper the expansion of trade, employment and growth in many developing countries. These economic policies ought to be better integrated into development aid strategies by donors. Further, greater attention should be paid to the important role of the private sector in meeting the MDGs. Like governance and infrastructure, the role of the private sector has also been neglected in the MDGs.

In 2000, the international community committed itself to achieving eight lofty goals. While the upcoming September U.N. Summit on the MDGs will surely highlight some of the partial successes in meeting the MDGs in some settings, there ought to be an honest and transparent focus on the many setbacks in many settings around the world, and a frank assessment as to the reason for such setbacks.

The evidence suggests that the uneven progress in MDGs is related to major differences in the quality of governance across nations. Furthermore, there are many dimensions of governance, such as gender rights and media freedoms, that may have been subject to particular neglect. Yet more generally, as stated, governance has not received the attention it deserves in past years in the context of MDGs.

Thus, increased focus on governance dimensions including corruption, inequality, media freedoms and gender rights is required to help address key hurdles to progress. By paying greater attention to governance, to improved aid selectivity and allocation, and targeting underemphasized sectors and promoting the role of the private sector, many of the MDGs may still be within reach.

[2] Table 1 covers only selected MDGs and a few representative targets. For a more comprehensive overview of progress refer to the World Bank’s interactive tool.

[4] For additional information on papers linking governance and development, refer to presentation slides 13 and 14.