Editor’s Note: This commentary was originally published by VoxEU on January 18, 2011.

In an effort to reduce its sizeable current-account surplus, the Chinese government has made it a priority to “rebalance” growth in China by stoking private consumption. This column examines the determinants of the rising household saving rate that keeps Chinese consumption so low.

Economists have repeatedly warned policy-makers about imbalances in the global economy, including those caused by the actions of China in running up a colossal current-account surplus. During the global financial crisis and the following global recession, this surplus shrank from 11 percent of GDP in 2007 to an estimated 5 percent of GDP in 2010, but many analysts view this as a temporary respite related to the contraction in trade and expect China’s current-account surplus to rise again (Baldwin, 2009).

Chinese government officials, meanwhile, have argued that the current-account surplus is driven by structural factors and that the exchange rate has little role to play in influencing the saving-investment balance. They have also made it a priority to “rebalance” growth in China by stoking private consumption. As part of this debate, we ask what determines the high household savings that have been keeping China’s consumption so low.

Gross domestic saving in China has surged since 2000, climbing to over 50% of GDP starting in 2007 (Figure 1; figures are at bottom of the page). In particular, enterprise saving – including that of state-owned enterprises – has risen sharply in recent years. Government saving has also increased. Over this period, the share of household saving in national saving has not changed much, but this is mainly because of a fall in the share of household income in national income rather than a decline in the household saving rate. The share of private consumption in GDP has fallen to about 35 percent, the lowest share among any of the major advanced and emerging market economies (Prasad, 2011).

Chinese households save a large share of their disposable incomes and their average saving rate has increased over the last decade and a half (Figure 2). This pattern is particularly pronounced for urban households, which account for about two-thirds of national income. After remaining relatively flat during the early 1990s, the average saving rate of urban households relative to their disposable incomes rose from 18% in 1995 to nearly 29% in 2009.

This increase took place against a background of rapid income growth and a real interest rate on bank deposits that has been low over this period (and even negative in some years, as nominal deposit rates are capped by the government). This pattern of a rising household saving rate at a time of high income growth seems inconsistent with a certainty-equivalent life-cycle hypothesis model, which would imply that future high income growth should cause households to postpone their savings.

In our first paper (Chamon and Prasad, 2010), we use data from the annual Urban Household Surveys to characterize household saving patterns. These are large annual cross-sectional surveys conducted by the National Bureau of Statistics.

We test a number of conventional theories and find little evidence that they can explain these patterns. For instance, the data suggest a limited role for demographic shifts in explaining saving behavior. The cohorts most affected by the one-child policy are not among the highest savers.

Instead, the declining public provision of education, health, and housing services (the breaking of the “iron rice bowl”) appears to have created new motives for saving. This can contribute to rising savings as younger households accumulate assets to prepare for future education expenditures and older households prepare for uncertain (and lumpy) health expenditures.

The inefficiency of “self-insurance” contributes to higher aggregate savings (as many households save in order to protect against a shock while relatively few may actually be hit by one). We estimate that the motive of saving for health expenditures accounts for an increase of more than 5 percentage points. The extensive privatization of the housing stock has also contributed to savings. We estimate that saving for house purchases increased average saving rates by 3 percentage points relative to the 1990s, with the effect concentrated among households with younger household heads (that are less likely to own their dwellings).

While cross-sectional household data can help evaluate the importance of competing channels, it is less informative when saving rates have risen across the board, as is the case in urban China. If indeed rising uncertainty and the related increase in precautionary saving is an important driving force behind the trend in saving rates, the availability of panel data on household income could help quantify that uncertainty and gauge its potential impact on savings.

In a second paper (Chamon, Liu and Prasad, 2010), we use a panel dataset from the China Health and Nutrition Survey. That survey does not provide information on consumption or savings but does have data on incomes that allows us to quantify the rise in income uncertainty and decompose the variance of income into components attributable to permanent versus temporary income shocks. We find strong trend growth in both the mean and the variance of total household income. Interestingly, the variance of permanent shocks to household income has remained relatively stable, while the variance of transitory shocks trends upwards. This result is in line with a large literature on how technological and sectoral shifts and the associated labor reallocation can generate higher transitory uncertainty even though some of these shifts themselves are permanent in nature.

Based on these results, we calibrate a simple buffer-stock/life-cycle model of savings to evaluate the implications of rising uncertainty on household saving rates. Under plausible parameter values, the rising transitory variance of income can explain about 4 percentage points of the increase in the saving rate among the households with younger heads. Households with older household heads that have already accumulated significant savings can more easily accommodate transitory shocks and this factor does not add much to their savings.

On the other hand, households with older heads are more affected by the pension reforms in 1997, which transferred urban pension obligations from employers (predominantly state-owned enterprises) to provincial governments. We estimate that a decline in the pension replacement rate from 75% to 60% of pre-retirement income (in line with estimates for the transition generation under the reform) can explain a 6-8 percentage point increase in saving rates for households with heads in their 50s. The initial effect is more muted for younger households, who have a longer time to adjust to the pension reforms. Thus, we are able to trace much of the increase in savings, concentrated among households with relatively young and relatively old household heads (the “U-shaped” pattern described above), to higher income uncertainty and pension reforms.

Our analysis based on cross-sectional and panel data sheds light on different motives that drive the saving behavior of Chinese households. While the combined effect may be smaller than the separate estimates from the two independent approaches, the results are able to account for a substantial portion of the increase in average saving rates of urban households as well as the U-shaped age-saving profile of savings. 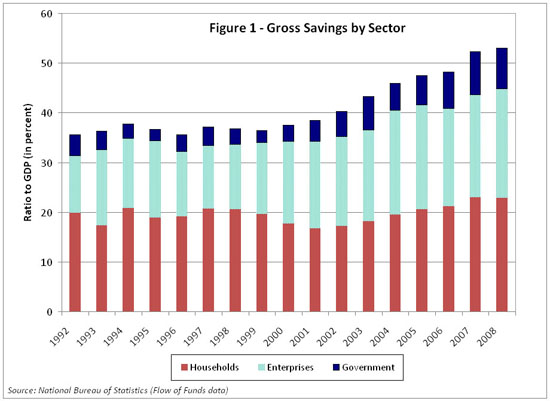 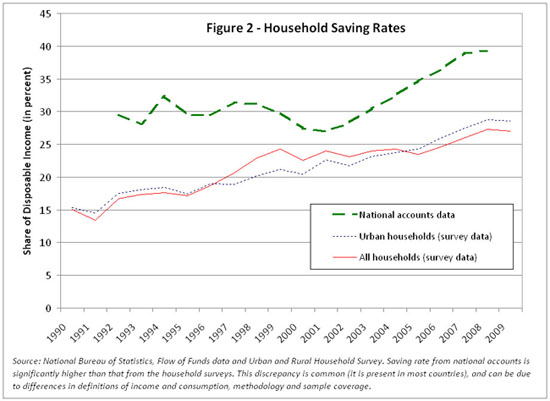 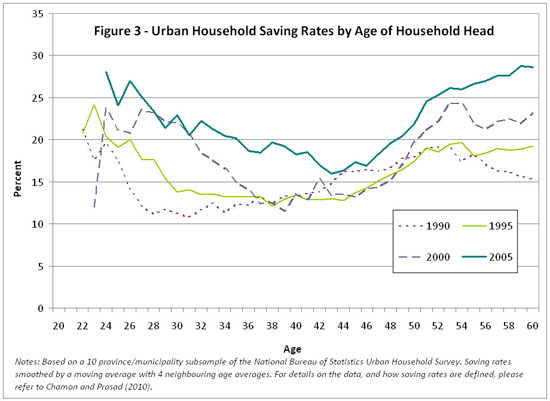