In today’s Arab world, all politics is local.

This paper examines the rise of the new sectarianism within the Arab world, specifically looking at Bahrain, Lebanon and Iran, and offers key policy recommendations for the United States. In the midst of the Arab Awakening, there is a new Sunni-Shi’a divide which has greatly complicated the diplomatic and geopolitical challenges facing the United States by demanding that serious consideration be given to religious difference in its own right, and not simply as an epiphenomenon stemming from social, economic, or political contestation. Religion, gender, and ethnicity play a far more prominent role in determining social and political interaction than in the past. 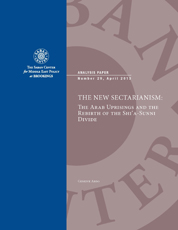 While analysts, scholars and decision-makers are quick to observe that the Shi‘a-Sunni conflict is a battle within Islam, the broader geo-political implications from the rise in sectarianism should be of great concern to the United States as it seeks to preserve its interests in the Middle East. (In Bahrain, for example, the lack of reconciliation between the Shi‘a-dominated opposition and the U.S.-backed Sunni government is radicalizing both sides.)

In the long-term, the United States, Saudi Arabia, and other Gulf states which support the Sunni Al Khalifa tribe will undercut their security objectives if they do not take measures to assist the opposition or penalize the Al Khalifa government for its repressive policies that have led to well-documented human rights violations.

This paper addresses important U.S. foreign policy concerns relying on approximately 200 substantive interviews with key players, analysts, and policymakers in the Middle East, and another two dozen interviews in the United States and Europe, conducted from March 2012 to January 2013, as well as current literature and media reports in Persian, Arabic, and English. I will then conclude with some analysis and recommendations for U.S. policymakers struggling with the challenges posed by the reemergence of sectarian discourse in the politics of the Muslim Middle East.

September 11 in the White House