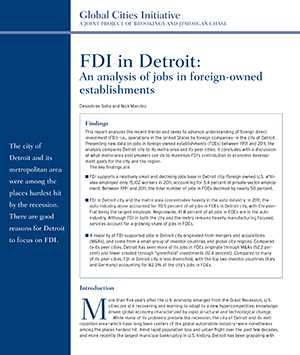 This report analyzes the recent trends and seeks to advance understanding of foreign direct investment (FDI)—i.e., operations in the United States by foreign companies—in the city of Detroit. Presenting new data on jobs in foreign-owned establishments (FOEs) between 1991 and 2011, the analysis compares Detroit city to its metro area and its peer cities. It concludes with a discussion of what metro-area policymakers can do to maximize FDI’s contribution to economic development goals for the city and the region.

The key findings are: