As the debt ceiling drop-dead date draws closer, equity markets are swooning and short-term U.S. Treasury interest rates are spiking, but longer-term interest rates are flat-to-down. What is driving this discrepancy? At best, this implies the bond market thinks there will be no default. At worst, it suggests that there would be a relatively short delay in interest payments with no long-term consequences, such as a delay or default on future debt or a loss of confidence in U.S. Treasuries. Perhaps this environment is similar to the July-August 2011 debt ceiling crisis and subsequent S&P downgrade of U.S. government debt. At that time, equities sold off and long-term Treasuries rallied as demand for safe haven assets overwhelmed default and then downgrade concerns. Today’s bond markets generally sanguine view has historically been correct. In the event this time proves different and Washington is not able to come to an agreement on the debt ceiling, much of the Treasury market may be in for a shock.

If, as Treasury Secretary Lew expects, the Treasury runs out of extraordinary measures on or about October 17th and is unable to prioritize payments, the U.S. government will likely be unable to fully service its debt until the ceiling is increased. The interest on the Treasury Bills, Notes or Bonds that are coming due during that period will likely be delayed or might not be paid in full.[1] As a result, we can use the recent behavior of Treasury interest rates to assess that market’s probability of default or the timing of arrears.

As Figure 1 illustrates, over the last two weeks very short-term Treasury interest rates have jumped by almost 0.30%, indicating a significant change in sentiment about default in the short-term. Meanwhile, longer-term treasury bills are effectively unchanged, especially if you adjust for the spike in very short-term interest rates. Furthermore, as maturities increase beyond three years, interest rates have actually fallen (Figure 2). The Treasury market is telling us that it is concerned about repayment risk over the next month or two, but is unfazed after that. In my opinion, this is a significant inconsistency, as even a short delay in repayment would likely roil holders of Treasury debt across all maturities. 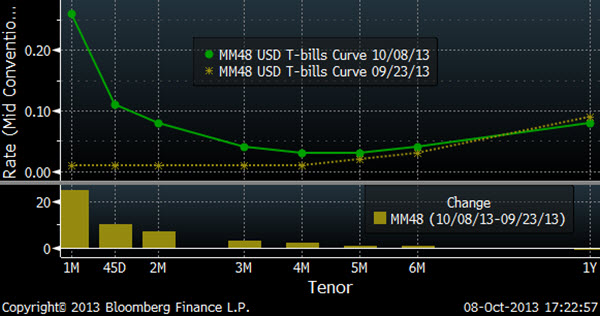 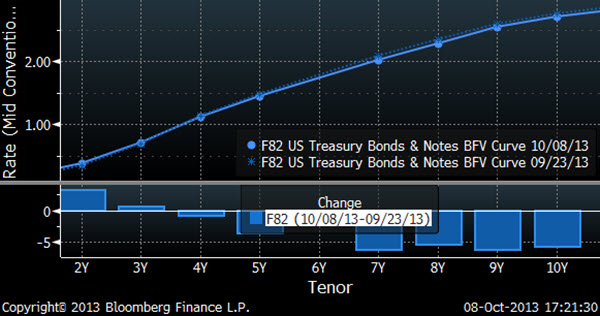 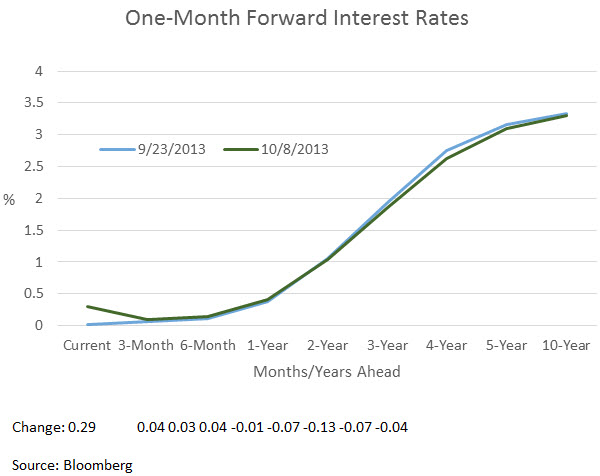 Credit Default Swap (CDS) for the U.S. government show a similar pattern, with a higher probability of default in the near-term and default probabilities falling in the medium term (Figure 4). Over the long-term, default probabilities rise again as one would expect. Interestingly, the CDS market was much less sanguine about default in mid-September than the Treasury market. CDS yields had already risen, while short-term Treasury bill yields were sitting at multi-year lows in late September. It is also curious that long-run default probabilities implied by CDS were higher earlier this year. However, one should note that CDS market on the US government is highly illiquid, especially in tenors outside of the traditional five-year instrument. 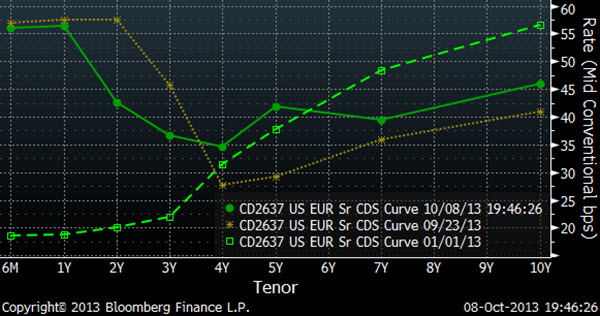 Using this forward interest rate technology one can estimate the market’s probabilistic assessment of the number of days that interest payments will be delayed. If as everybody believes the US has the ability to meet all its obligations once the debt limit is raised, then the recent spike in interest rates is a reflection of expected delays in payment rather than a loss in principal and interest. Assuming that is the case, we can solve for the market’s expectation of the number of days of extra interest that the U.S. government will have to pay after it goes into arrears.[3]

For example, for Treasury bill maturing October 31, whose interest rate has spiked the most – likely because it coincides with the market’s assessment of when a delay in payment is most likely to occur – I estimate that the market expectation is that bond holders won’t be paid in full until early to mid-December. This is much longer than the rest of the Treasury market is suggesting. Perhaps this difference reflects the view that once the debt ceiling is raised debt that is coming due will be paid in full, but debt that is in arrears will take longer to sort out. Or, perhaps it’s another contradiction between very short-term interest rates and the rest of the Treasury market.

Finally, as noted above, perhaps longer dated Treasury securities are reacting to other market forces such as safe haven flows that result from declines in riskier asset prices (i.e. equities), or expectations that economic activity is going to slow as a result of the government shutdown or possible default. As Figure 5 illustrates, during the last major debt ceiling crisis in late July/early August 2011 there was a very high positive correlation between the S&P 500 and 10-year Treasury yields. If there is arrears or default over the next several weeks, it is very likely that risky assets will sell off. It is hard to imagine that Treasuries will remain the safe haven asset of choice. 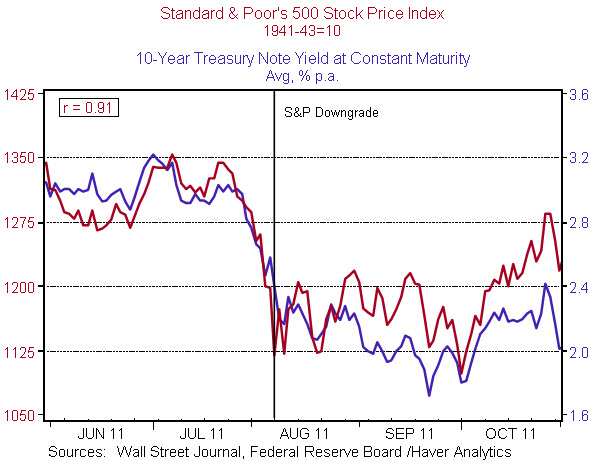 Overall, the consensus view that the debt ceiling will be increased and the U.S. won’t default is the most likely outcome. Hopefully Washington is not taking the current complacency in long-term Treasuries as a sign that there is no need for immediate action on the debt ceiling. If they let themselves be persuaded by this false dichotomy, they risk going over the cliff and taking the bond market with them.

[1] At this juncture it is highly unlikely that the principal would not be repaid as the Treasury has the ability to roll over existing debt.  But given the Treasuries limited cash positions there is a very low probability that a timing mismatch could cause the Treasury to be unable to repay principal.

[3]  In order to do this calculation, we must make assumptions about what the interest rate should’ve been had Congress already raised the debt ceiling, and the interest rate the government will pay on debts that are in arrears.  For the example below, I use a range of interest rates based on the forward curves and assume that the U.S. will pay 0.12% after the debt goes into arrears, as this was the at issue interest rate for the 6-month bill that matures on 10/31/13.