As a Chilean, I am proud and relieved to witness the ongoing rescue of the 33 miners who have spent 69 days buried in a mine shaft 2,000 feet under the Atacama Desert. As I post this entry, 20 of the 33 miners have been flawlessly pulled to safety. Late last night, the sheer emotion of watching the first rescued miner, Florencio Avalos, emerge from the dark depths of the San Jose mine and embrace his wife and crying boy is difficult to translate into words.

So far, the miners appear to be in good shape following their long ordeal, and it is reasonable to expect that this truly impressive operation will succeed in rescuing all of the trapped miners by the end of the day (learn more about the 33 miners, and how are they rescued). The resourceful miners, their relatives, the government and its leadership, as well as many expert workers from Chile and abroad, deserve enormous and shared credit in this remarkable tale of survival and ingenuity. The successful rescue of the miners is no “Chilean Miracle.” It is not the result of a supernatural act from above, but instead stems from the heroic strength of those entombed below ground and the indefatigable efforts of many others at ground level. The rescue is an act of people, of leaders and of good governance.

This episode has not only galvanized one nation, but the entire world. The images of the first rescued miners emerging from the Phoenix rocket-like rescue capsule are riveting to me, and I surmise, to the estimated 1 billion people around the world that are watching this uplifting saga unfold on live TV.

The last time that Chile got such worldwide attention was earlier this year when a monster earthquake and tsunami struck the south of the country. While the uplifting outcome of the current episode contrasts with the tragic loss of hundreds of lives in the earthquake and tsunami, both episodes have highlighted the strength of governance in Chile, and the enormous distance travelled by Chile from the undemocratic days of Pinochet over two decades ago to its high governance standards over the past few years.

Chile’s successful efforts are not an anomaly or a fluke. For years, the country has been among the top rated emerging economies of the world in terms of its quality of governance. In fact, Chile’s governance rating is superior to a number of rich industrialized economies, placing around the top 30 countries in the world (see figure below, from the just-released Worldwide Governance Indicators). 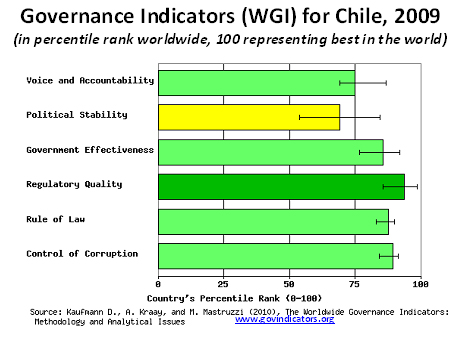 This is not the time to engage in a discussion of competing definitions of good governance. Instead, while basking in the pride of this special moment let me mention an informal notion I floated during the recent FIFA World Cup: good governance is when the whole exceeds the sum of its parts—when leadership, teamwork, and a selfless collaborative spirit result in something as special as the today’s rescue effort.

How such good governance—and the vast political capital that Chile’s President Sebastián Piñera now has—can be channeled to address Chile’s pending challenges, including in the earthquake reconstruction, in addressing high inequality, as well as in reforming labor regulations and the education system, is an important issue for the day after tomorrow and beyond. But today we celebrate the mesmerizing and daunting journey and rescue of the 33 miners, and we are reminded of the art of the possible.