President Barack Obama has made climate change a priority for the United States and has positioned the U.S. to play a leading role at the 21st annual U.N. climate conference (COP21). With talks reaching the final stages in Paris, the U.S. is poised to accomplish its goals to reach an international agreement that creates a framework to contain global warming to no more than 2 degrees Celsius. 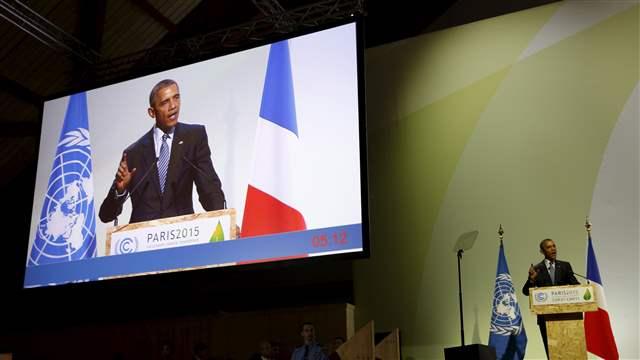 Reuters/Kevin Lamarque – U.S. President Barack Obama participates in the COP21 session on statements by heads of state and government at the climate summit in Paris, France, November 30, 2015

In a new brief, Nonresident Senior Fellow Katherine Sierra breaks down the accomplishments of the U.S. Climate Action Plan and the challenges that remain, while also commenting on America’s evolving role in global climate change negotiations and beyond.

Sierra assesses the strengths of current U.S. climate change initiatives, but also addresses two major concerns as the Paris talks began: the sustainability of the Climate Action Plan and the sufficiency of the Intended Nationally Determined Contributions (INDC) to limit warming to 2 degrees C. While the goals for Paris are ambitious, Sierra argues that with unified global engagement and a swift, vigorous pursuit of U.S. and other INDC plans, we will be able to stay on a trajectory that makes them attainable.

The Climate Action Plan has already outlined “notable progress” in its steps to limit carbon pollution from power plants. Sierra emphasizes that a key component of the plan going into Paris was to build momentum through “bilateral talks [that] will allow countries to build support for their own domestic programs by increasingly showing others that they are not ‘going it alone.’”

While U.S. contributions going into Paris are considerable, questions and risks remain. Questions around the political durability of the U.S. Climate Action Plan will color the negotiations.

The U.S. Climate Action Plan’s 2025 targets are achievable with diligent pursuit, but they are not enough. Sierra argues that “with a national carbon price and additional greenhouse gas-cutting measures across the economy, the United States can reduce its emissions 40-42 percent below 2005 levels in 2030, and 50-53 percent in 2040.”

Looking beyond Paris, the challenge will be to continue the momentum from the talks. Given the president’s focus and emphasis on climate change, Sierra expects that “he and his administration will pursue the elements in the plan vigorously. This will include defending the Clean Power Plan and implementing the other elements in the plan as quickly as possible.”

, and the accomplishments of the U.S. Climate Action Plan and the challenges that remain.

A conversation about climate change mitigation and resilience

What COVID-19 has cost the climate