As the congressional primary season continues with a slew of important states today, the big question—how’s the Tea Party doing—remains hard to answer. On the one hand Tea Party candidates have failed to capture high profile Senate primary seats in Texas and North Carolina, increasing the Republican Party’s chances of winning the Senate so far. Or so the conventional wisdom goes.

On the House side however, the Tea Party assault on the GOP has been intense.  As the chart above indicates the GOP has drawn a very large number of challengers this year compared to the less conflicted Democrats. And the vast majority of Republican challengers have been identified, in one way or the other, with the Tea Party.

But the final metric of the primaries to date is whether or not the House Tea Party candidates are winning.  The verdict: incumbent Republicans are holding their own.  So far only one incumbent, Congressman Ralph Hall, has failed to win his primary outright—though he won a large plurality in the first round of his primary.  At 91 years old he’s now the oldest member of Congress in history.  Some of his constituents obviously think he may be too old and hence he faces a run-off on May 27.

In Republican primaries where there are no incumbent Republicans (open-seat primaries), Tea Party candidates aren’t doing so well.  As the following chart illustrates the business-conservative wing of the GOP appears to be winning in a plurality of districts.  Of course, many of these districts are safe Democratic districts so these more moderate Republicans still won’t make it to Congress. Thus, some may consider such a performance to be moot. However, as many Republican primaries tend to reflect performance among Republican voters, these results still show us something about political undercurrents within the GOP. 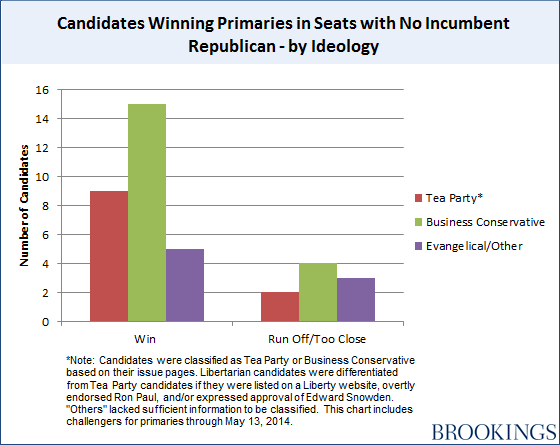 Thus, the jury is still out on the future of the Tea Party and the Republican Party. Individual Tea Party candidates don’t seem to be winning so far but their sheer numbers in these races mean that they will be a force to reckon with—win or lose.