In early March, Brookings hosted dozens of economists to discuss new papers submitted to the Brookings Papers on Economic Activity (BPEA), the academic journal published by Brookings Economic Studies that has been informing public policy since 1970.

The conference is known for introducing groundbreaking research. Just last year, a major BPEA finding from a study of student borrowers and loan defaults changed how we think about the student loan “crisis.” BPEA research has also informed several of the Federal Rerseve’s most discussed tools and processes, including quantitative easing, Operation Twist, and forward guidance.

At this spring’s BPEA conference, we learned four major things that are summarized in the charts below. For more, read all six new papers here:

This paper is one economists will be talking about for years to come. We’ve known for a while that U.S. productivity growth has slowed, which matters because high productivity often translates into higher standards of living and well-being.

Many have wondered if the slowdown can be blamed on our inability to measure technological innovations, but the new research tells us that, unfortunately, that’s not the case.

This chart below shows that productivity growth was unusually fast from 1995 to 2004. While it’s slowed considerably since then, it’s not significantly slower than “normal.” Another reason measurement is not to blame: In addition to slowdown in IT production and other hard-to-measure industries, there was a substantial slowdown in well-measured industries. Mismeasurement was a bigger problem during the late 1990s, when productivity was uncharacteristically high, than it is today. 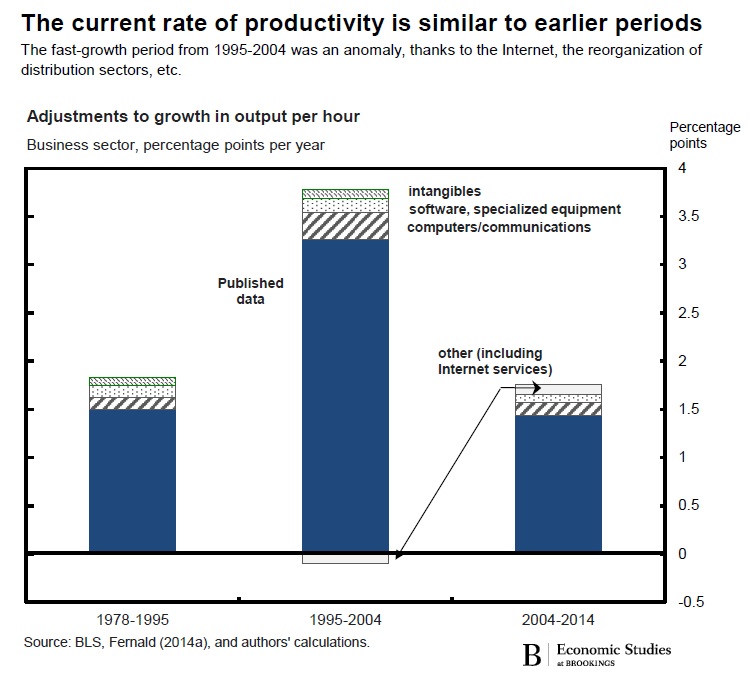 2. Low income students living in states with high inequality are more likely to give up on high school

The authors of this new paper found one of the first direct links between income inequality and reduced rates of upward mobility: Boys whose mothers did not complete high school are even more likely to drop out of high school themselves—if they live in areas with high income inequality.

In many states in the South with higher levels of income inequality—including Louisiana, Mississippi, Georgia, and DC—the high school dropout rate nears 30 percent.

The finding goes against conventional thinking among economists that income inequality would provide incentives for individuals to invest in their human capital—like staying in school—to climb up the income ladder, and reinforces a need for interventions that focus on bolstering low-income kids’ perceptions of what they could achieve in life. 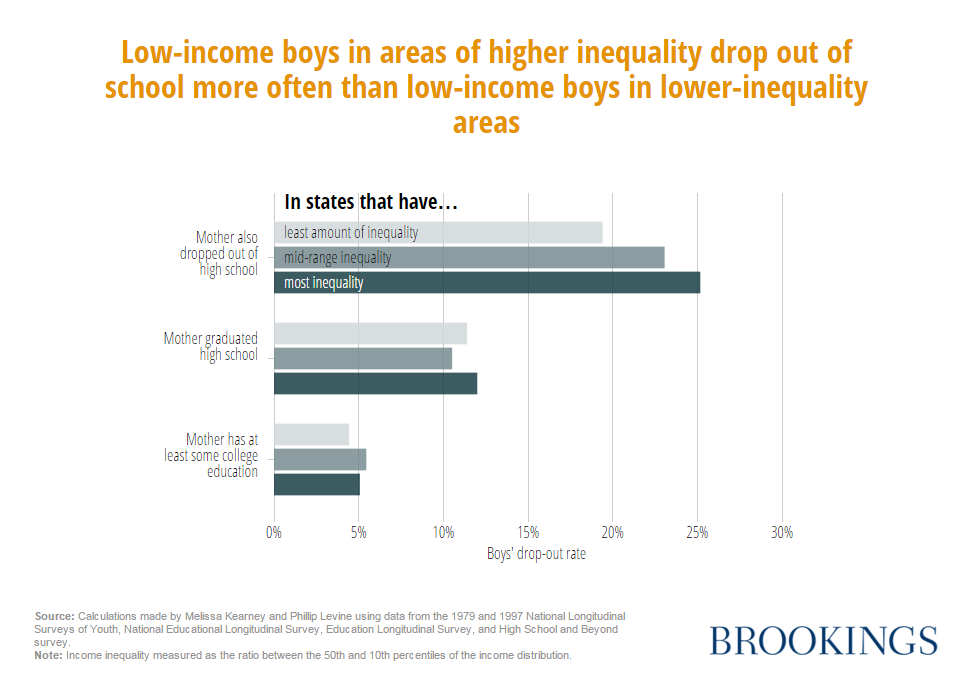 3. The 1% aren’t doing as well as we thought, which may affect how we address inequality

Several Fed economists found that the concentration of wealth and income of the top 1 percent has increased far less than the most widely-cited studies estimate (including those by noted economists Thomas Piketty and Emmanuel Saez).

The 1 percent are still doing pretty well by most measures, but the uncovering of methodological weaknesses and mismeasurement matters for policies that seek to redistribute income. When income and wealth at the top are poorly measured—and particularly when they are overstated—properly analyzing the costs and benefits of redistributive policies like social insurance and government investment becomes challenging.

Put another way: the more we know about inequality, the more we can address it effectively. See the blue line below for what the new estimates for income look like compared to past estimates. (See the wealth estimates here.)

4. American workers are moving around the labor market less and less, and it’s not because of disruptive technologies

Less “fluidity” or dynamism in the labor market is bad news for workers because it means they have fewer opportunities to renegotiate their current position or change jobs, which has an impact on wages.

That’s one reason there are big implications from this new paper that shows that a three-decade decline in fluidity has been occurring along a number of dimensions. The finding is at odds with a common perception that job-hopping and career maneuvering are more prevalent today than in decades past.

Another interesting point: The decline in fluidity was smaller in states with more workers in routine jobs displaced by technological advancements. See the decline in your state here: 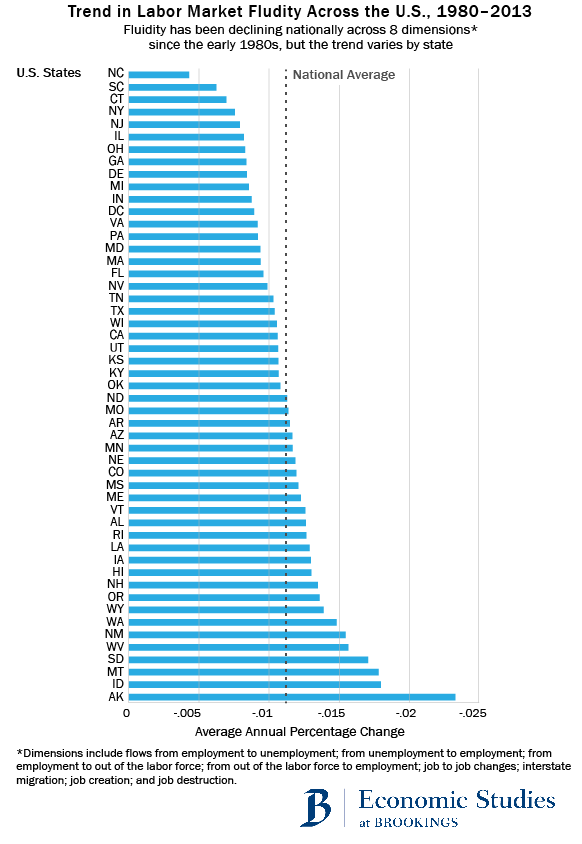 To learn more about the research mentioned above—or to browse past papers—visit the Brookings Papers on Economic Activity homepage. There you’ll find links to summaries of all six papers. You’ll also be able to download the full versions of the papers if you’re looking for some wonky reading.

To be among the first to hear about new research submitted later this year in the Fall edition of BPEA, sign up to hear more from Economic Studies at Brookings.

The answer to America’s supply-chain woes lies in automation