There is a lot of hope around the potential of Big Data—massive volumes of data (such as cell phone GPS signals, social media posts, online digital pictures and videos, and transaction records of online purchases) that are large and difficult to process with traditional database and software techniques—to help achieve the sustainable development goals. The United Nations even calls for using the ongoing Data Revolution –the explosion in quantity and diversity of Big Data—to make more and better data usable to inform development analysis, monitoring and policymaking: In fact, the United Nations believes that that “Data are the lifeblood of decision-making and the raw material for accountability. Without high-quality data providing the right information on the right things at the right time; designing, monitoring and evaluating effective policies becomes almost impossible.” The U.N. even held a “Data Innovation for Policy Makers” conference in Jakarta, Indonesia in November 2014 to promote use of Big Data in solving development challenges.

Big Data has already played a role in development: Early uses of it include the detection of influenza epidemics using search engine query data or the estimation of a country’s GDP by using satellite data on night lights. Work is also under way by the World Bank to use Big Data for transport planning in Brazil.

During the Data for Development session at the recent NetMob conference at MIT, we presented a paper in which we jump on the Big Data bandwagon. In the paper, we use mobile phone data to assess how the opening of a new toll highway in Dakar, Senegal is changing how people commute to work (human mobility) in this metropolitan area. The new toll road is one of the largest investments by the government of Senegal and expectations for its developmental impact are high. In particular, the new infrastructure is expected to increase the flow of goods and people into and out of Dakar, spur urban and rural development outside congested areas, and boost land valuation outside Dakar. Our study is a first step in helping policymakers and other stakeholders benchmark the impact of the toll road against many of these objectives.

Assessing how the impact of the new toll highway differs by area and how it changes over time can help policymakers benchmark the performance of their investment and better plan the development of urban areas.

The Dakar Diamniadio Toll Highway (in red in Figure 1), inaugurated on August 1, 2013 is the first section (32 km or 20 miles) of a broader project to connect the capital, Dakar, through a double three-lane highway to a new airport (Aeroport International Blaise Diagne, AIBD) and a special economic zone, the Dakar Integrated Special Economic Zone (DISEZ) and the rest of the country. 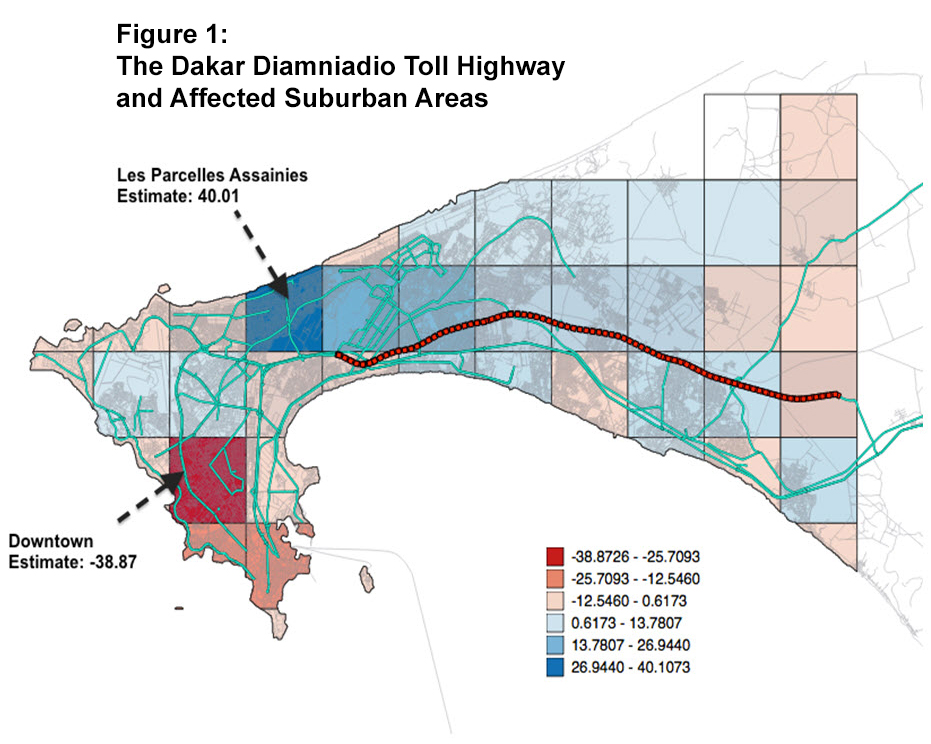 Note: The numbers indicate the incidence of increased inter cell mobility and were used to calculate the percentage increase in mobility.

The cost of this large project is estimated to be about $696 million (FCFA 380.2 billion or 22.7 percent of 2014 fiscal revenues, excluding grants) with the government of Senegal having already disbursed $353 million. The project is one of the first toll roads in sub-Saharan Africa (excluding South Africa) structured as a public-private partnership (PPP) and includes multilateral partners such as the World Bank, the French Development Agency, and the African Development Bank.

In our study, we ask whether the new toll road led to an increase in human mobility and, if so, whether particular geographical areas experienced higher or lower mobility relative to others following its opening.

Did the Highway Increase Human Mobility?

Using mobile phone usage data (Big Data), we use statistical analysis in our paper to approximate where people live and where they work. We then estimate how the reduction in travel time following the opening of the toll road changes the way they commute to work.

As illustrated in the map of Figure 1, we find some interesting trends:

These trends are important and would have been difficult to discover without Big Data. Now, though, researchers need to parse through the various reasons these trends might have occurred. For instance, the Parcelles Assainies area may have benefited the most because of its closer location to the toll road whereas the feeder roads in the downtown area may not have been able to absorb the increase in traffic from the toll road. Or people may have moved from the downtown area to less expensive areas in the suburbs now that the new toll road makes commuting faster.

The Success of Big Data

From these preliminary results (our study is work in progress, and we will be improving its methodology), we are encouraged by the fact that our method and use of Big Data has three areas of application for a project such as this:

Benchmarking: Our method can be used to track how the impact of the Dakar Diamniadio Toll Highway changes over time and for different areas of the Dakar metropolitan areas. This process could be used to study other highways in the future and inform highway development overall.

Zooming in: Our analysis is a first step towards a more granular study of the different geographic areas within the Dakar suburban metropolitan area, and perhaps inspire similar studies around the continent. In particular, it would be useful to study the socio-economic context within each area to better appreciate the impact of new infrastructure on people’s lives. For instance, in order to move from estimates of human mobility (traffic) to measures of “accessibility,” it will be useful to complement the current analysis with an analysis of land use, a study of job accessibility, and other labor markets information for specific areas. Regarding accessibility, questions of interest include: Who lives in the areas most/least affected? What kind of jobs do they have access to? What type of infrastructure do they have access to? What is their income level? Answers to these questions can be obtained using satellite information for land prices, survey data (including through mobile phones) and data available from the authorities. Regarding urban planning, questions include: Is the toll diverting the traffic to other areas? What happens in those areas? Do they have the appropriate infrastructure to absorb the increase in traffic?

This experience tells us that there are major opportunities in converting Big Data into actionable information, but the impact of Big Data still remains limited. In our case, the use of mobile phone data helped generate timely and relatively inexpensive information on the impact of a large transport infrastructure on human mobility. On the other hand, it is clear that more analysis using socioeconomic data is needed to get to concrete and impactful policy actions. Thus, we think that making such information available to all stakeholders has the potential not only to guide policy action but also to spur it.

Atkin, D. and D. Donaldson (2014). Who ’ s Getting Globalized ? The Size and Implications of Intranational Trade Costs . (February).