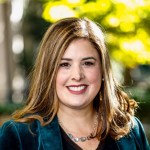 Prior to joining Brookings, Andrea was the head of communications for the NDC Partnership, a global coalition of over 130 countries and institutions working together to design and implement national commitments under the landmark 2015 Paris Agreement on climate change. Andrea worked directly with national governments in support of their communications and outreach efforts to achieve more ambitious climate and sustainable development goals.

From 2013-2016, Andrea led communications for The Pew Charitable Trusts’ global project to support countries in creating large protected areas of ocean, leading to the conservation of 3.6 million square kilometers of ocean. In this position, she collaborated closely with national governments and local and indigenous communities across Micronesia and Polynesia.

During the Great Recession, Andrea was the housing and foreclosure spokesperson at the U.S. Department of the Treasury. She was also the inaugural communications lead for former New York City Mayor Michael R. Bloomberg’s Office of Financial Empowerment, the first city government initiative in the U.S. focused on anti-poverty and financial empowerment for low-income families. She spent four years at the U.S. Department of Education, working closely with teachers, school administrators, and parents.